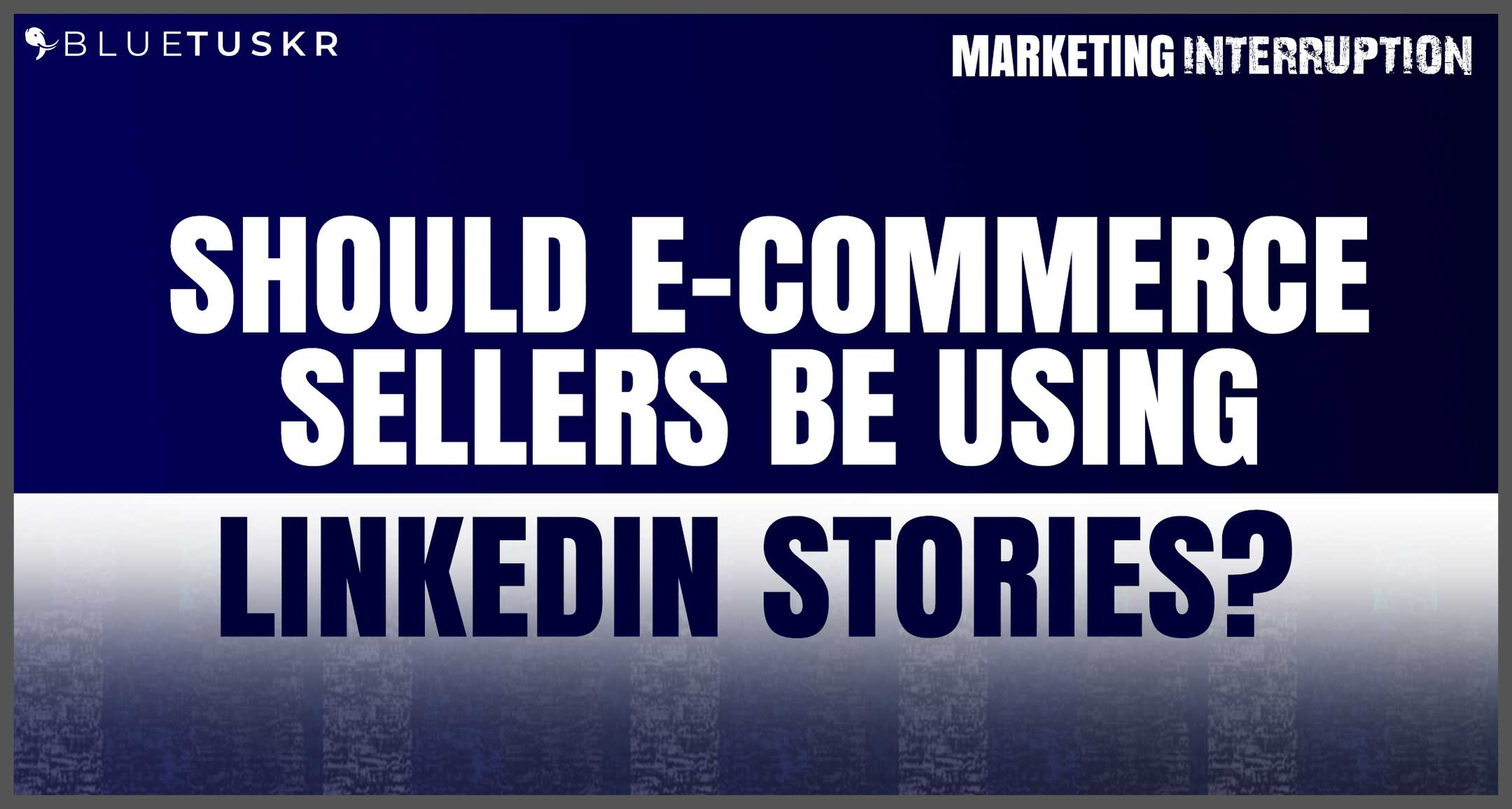 On the 68th episode of Marketing Interruption, Andrew Maff talks about LinkedIn Stories and whether or not e-commerce sellers should care about them. He dives into some B2B strategies that B2C sellers can be used to grow their businesses.

Welcome to episode number 68 of the marketing interruption podcast. I'm your host, Andrew Maffettone. Today, I'm going to talk to you about how I think that every platform should have stories. So LinkedIn released stories, and I'm going to kind of get my insight on if I think it's relevant for e commerce sellers or e commerce store owners specifically. And plus side note, if you haven't heard, slack is coming out with their own version of stories or whatever it is they're doing. But so LinkedIn stories comes out. And the first thing that happens is it gets bombarded with a ton of crap. It's like It's like the people who posted on there had never used Instagram stories before. It was interesting. But it was a ton of garbage was posted on there. But so I think it was like two months ago, where we did a podcast about how there's a bunch of like b2b strategies that regular b2c type e commerce sellers can use for b2b e commerce sellers. That stuff's easy. That one's pretty obvious, there's definitely a reason that you can use that there, specifically just because of the audience that's on LinkedIn.

But even on a b2c side, it still kind of has its ways. So think about the people that are on on LinkedIn, they are usually professionals in their industry, growing professionals in their industry, freelancers looking for work, and trying to showcase some of their work. And then you have the average person who comes on to LinkedIn like, once or twice a year, maybe because they're looking for a new job, or they're just like, maybe I should update my thing, just for the hell of it kind of stuff. So there's several different types of people who are on there. But if you didn't get LinkedIn stories, as a b2c seller, there's certain times where you basically still have the ability to advertise on on LinkedIn, and I talked about this in the other podcast about it kind of depends on your product line. So if you're selling obviously, something as basic as like office equipment, or office supplies of any kind downs, pretty simple. You could be b2b for that. But you could even do it for b2c if you're doing more like home office stuff. Because even right now, no matter who it is, you're selling to everyone's pretty much home office. So there's definitely an area for home office supplies to do well there. And then there's a what was the other one we talked about? apparel for companies who might have more of a formal attire, that something you would kind of wear to an interview or something like that, or if they wanted to do things that you could wear for virtual interviewer or anything along those lines. I know a lot of people when they you know, first start looking for a job, they go shopping for an interview outfit, and that could work on there as well.

Things like microphones or, or you know, phone stands or something that that maybe influencers would use and things like that those are all still very relevant. So it's going to kind of come down to if your LinkedIn page has a lot of followers, I would do your stories there. Because they do have the ability to do it on your actual company page. Or if you specifically have more connections than I would do it on your own personal profile. There's a couple different ways to do that. Obviously, if you're an e commerce seller, but you're also selling like coaching on how to do e commerce stuff, that one's kind of self explanatory, that still kind of b2b, but I wouldn't, I wouldn't exactly say it's not useful. I would say on a case by case basis, it can be done very well. It could even be done where you're interviewing, you know, influencers or other owners who are similar in your industry, just to kind of build that that rapport. I would say, go try it, give it a give it a do some research first look at some right now. They're all crap. So it's pretty easy to stand out. But look at some see what other companies are doing, see what other owners are doing. Kind of get some ideas and give it a real good try for about 30 to 60 days and see what it does see if it can bring in anything for you see if you can get some traffic from it. You know, see if you can get some conversions out of it.

There's definitely some cases where it will work very well. There are some cases where it may not work, but I would definitely say it's worth testing. If you want some ideas or anything like that, I send me shoot me an email marketing interruption bluetuskr.com let me know what it is you're selling. And I'll give you some ideas on what you could try on Instagram. I'm sorry on habit on LinkedIn stories, but if not, that's all I want to go over today. So rate review, subscribe, and I will talk to you tomorrow.