How to Measure Your Metrics and Expand Your Sales | EP. #68 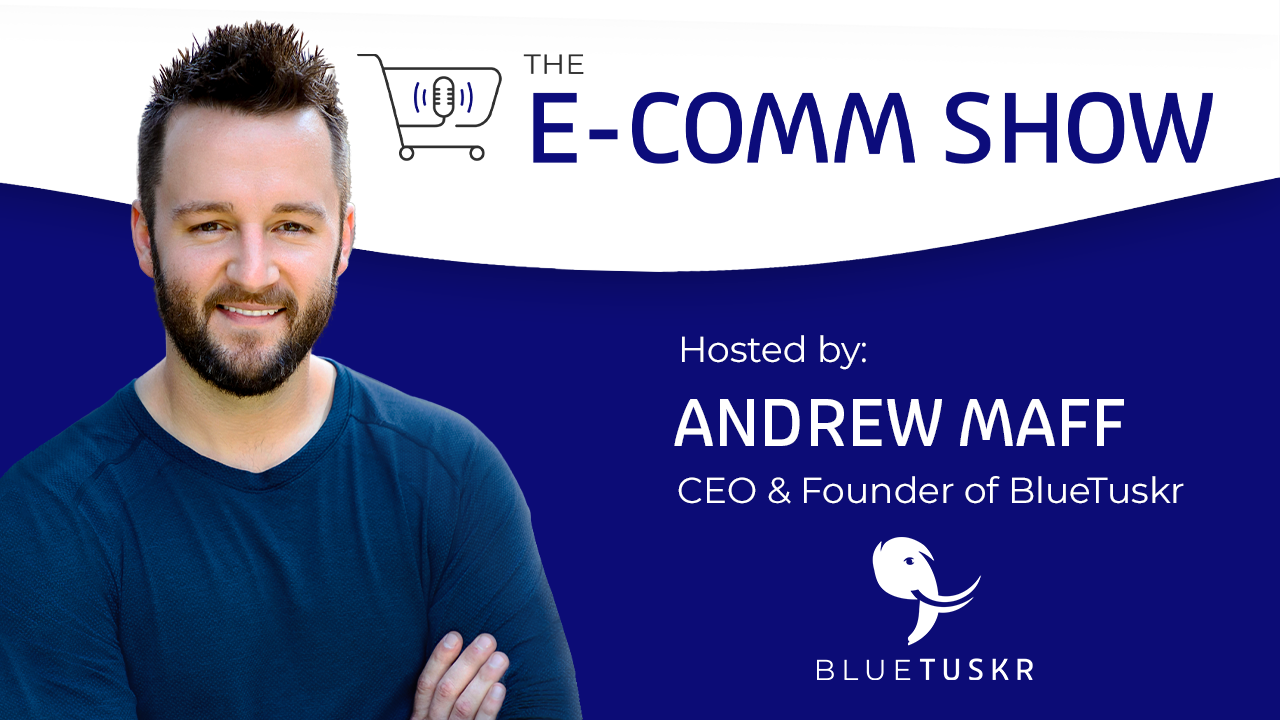 On this 68th episode of The E-Comm Show, our host and BlueTuskr CEO Andrew Maff is here to help you understand your metrics better plus some marketing strategies you can use to get more customers.

In this episode, you’ll learn where to source more leads, what forms of content you can use, how to execute your post-sales marketing plans, and of course, which KPIs you should be paying attention to.

How to Measure Your Metrics and Expand Your Sales

maybe not your entire customer base, but a certain segmented profitable area that you would want to focus on for your podcast and that would be something that you can bring in your new audience Hey everyone this is Nezar Akeel of Max Pro. Hi I'm Linda and I'm Paul and we're Love and Pebble.

Welcome to The E-Comm Show, presented by BlueTuskr, the number one place to hear the inside scoop from other ecommerce experts where they share their secrets on how they scaled their businesses and are now living the dream. Now, here's your host, Andrew Maff, my

acquiring other ecommerce companies, why would you do it? So expanding your product line seems pretty obvious that you're going to take on some more assets, but you're also going to take on some more liabilities. And so that can get a little bit messy, but it is a great way and an easy way to expand your product line. If you have, let's say, you do pet products and you sell, I don't know, leashes and harnesses, and you go out and purchase someone who creates collars like custom-made collars. It's a great extension of your product line. It can help. Fantastic, awesome it seems pretty common, right? The other side that many people don't think about is what else you can get out of that. Yes, you can learn some of their infrastructure, maybe their manufacturers are great, maybe their three peels are great. There are some other things there. But the one thing that I find a lot of people don't think about is you can expand your list. So again, we'll use leashes and harnesses as an example. And then you go out, and you purchase collars Well, what if they weren't selling as much as they wanted to, but they had a list of 500,000 people that buy seasonal dog collars, all of a sudden, you have 500,000 extra people that you can reach out to about a leash or about a harness. And so now you've expanded that. So now it's not so much about whether can I continue to sell these collars. Now, it's more about how can I leverage the existing audience of the callers' purchasers and use them for me or my brand. So that is a fantastic way. Now, the tricky way that Rohan has always talked about how you do it at basically zero cost or a minimal cost is to work out a deal with some of these smaller companies who aren't doing as well. They're looking for a way to exit, but they may be in a certain situation. So there's going to take some searching, there's going to take some extra things that you need to do to do your due diligence and make sure that you're finding the right person and the right company for this fit. But you can work your work out a deal with them and structure something in a place where you are offering them a profit share of either everything that you sell or you're offering them a profit share of their product line. So if you were to buy the collars, you could say, I'll give you $1 For every caller I sell until you make $500,000, which is fantastic. You just bought an entire company and did nothing, you paid nothing, and you're gonna, and you're gonna end up paying this guy for the next several years. But you're gonna give them $1 per unit. And depending on your margin, of course, that may be worth it. Then I lost my train of thought. Then on the other side of it, you might be willing to completely allow I'll give you 100% of the profit from the collars that I sell. So you're not going to make $1 off the collars. However, you can upsell them with your leashes and your harnesses with other things. So your current business is going to expand, and then eventually, you're going to pay off the previous owner. And now you have both. So there are really ways that you can get creative with some of these structured deals. Some people are so afraid of purchasing from another company. And they're so worried about Oh, how's it going to go, and there's so much it gets so messy and it can, and it does. But once you've done several of them, it starts to ease up. And you can start to structure and template out how you purchased someone and what you have to do, and there will be some lessons you'll learn along the way. Maybe reach out to Roland Frasier. I'm sure he'll help you with that. But it's a fantastic way to grow your list. It's a great way to expand your product line, and maybe even take on some existing capital if it's coming in, depending on how that looks. But you can get creative with this kind of stuff. So check out places like Shopify exchange. If you're a Shopify seller, that's a great way to go. So Shopify exchanges people looking to sell their Shopify sites and their businesses, be careful with it because some people just create a shitty website and then try to sell the site itself. Biz buy sell is another great one, and exchange marketplace is another great one. So check out those places. It doesn't even hurt to even look into it. Sometimes you can just set up alerts and a lot of these places, and you can find out, oh great, there's a company in, you know, pet supplies it's interested in how I can go purchase them. It's a great way to grow your company. Great way to expand it; think about it and look into it. I don't want to ramble on about the same thing. And, of course, go check out Roland Frasier, but if not, I will talk to you all tomorrow rate review subscription, and I will see you then.

Thank you for tuning in to The E-Comm Show head over to ecommshow.com to subscribe on your favorite podcast platform or the BlueTuskr YouTube channel. The E-Comm Show is brought to you by BlueTuskr, a full-service digital marketing company specifically for E-commerce sellers looking to accelerate their growth. Go to BlueTuskr.com Now for more information. Remember to tune in next week for another amazing episode of The E-Comm Show.