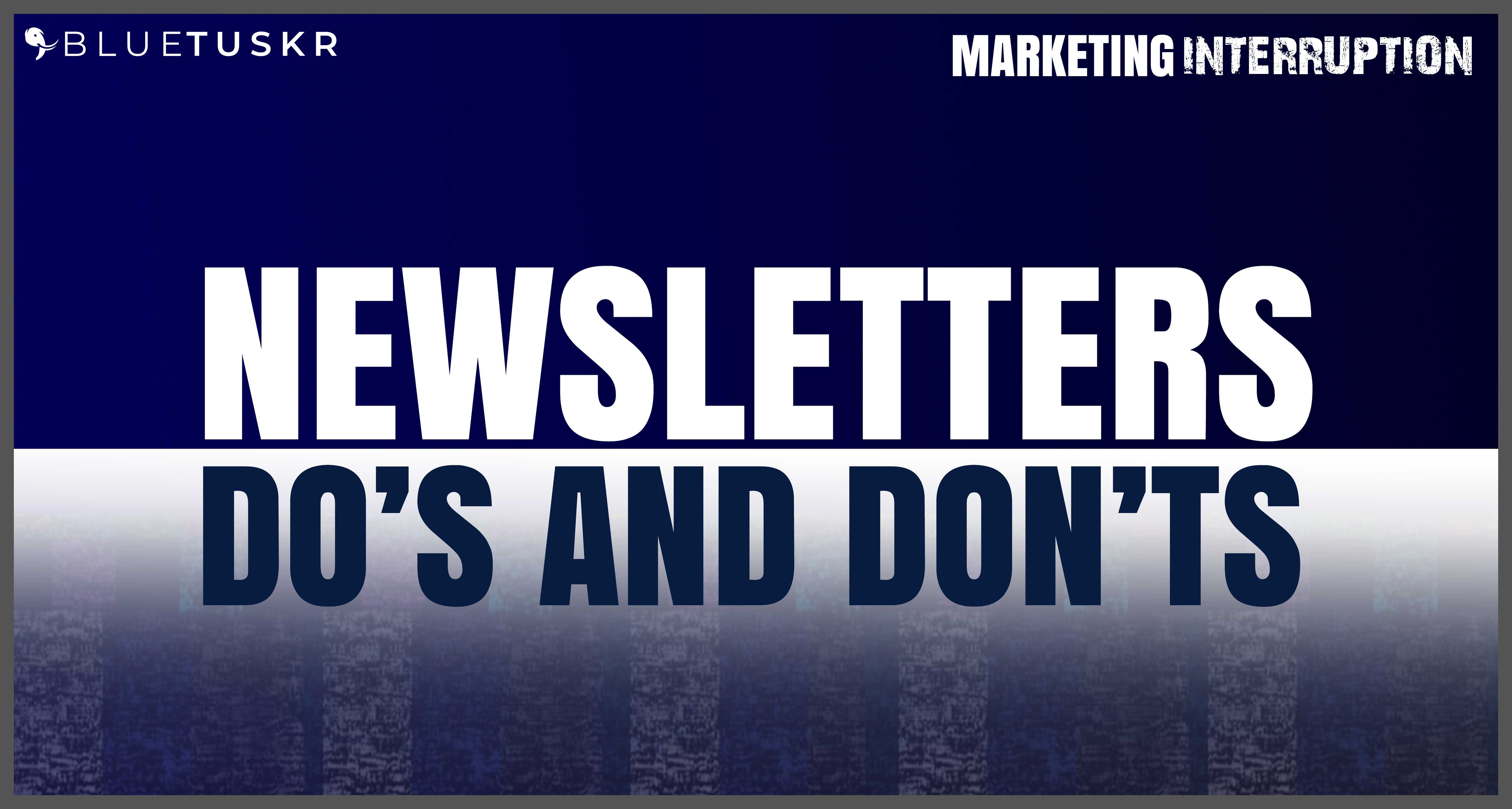 On the 23rd episode of Marketing Interruption, your host Andrew Maff talks about the things you should and shouldn't consider when creating a newsletter. He lists his DOs of personalization, A/B testing, segmentation, visualization, giving it character, and providing value. He also touches on his DON'Ts of don't be boring, blasting out blog posts, length of time between sends, grammatical errors, and more.

Episode Number 23 marketing interruption Andrew Maffettone host and go so today I'm doing newsletters, do's and don'ts. So here's why I wanted to do this one. So I I enjoy a good cigar every now and then. So I did finally find a pretty decent company that sells stuff online. That I can just order cigars from. And this is not an exaggeration when I tell you I get a newsletter or promotional email from them bare minimum three and a half times a day. I tell you three and a half because I started actually tallying it. And after two weeks, my average was three and a half, three and a half friggin emails a day from this company, I actually went to unsubscribe and decided to stick through it because I had to see why the hell they're doing this. It makes no sense. So I'm gonna start with the don'ts. Don't send a damn newsletter that many times don't even do it. Don't do it daily. Don't do it weekly. Don't do it that often. It's ridiculous. If you do a ton and by the way, I'm talking about at least specifically, e-commerce sellers right now promotional stuff. It's no one's going to shop with you until they get in the newsletter if you constantly send out promotions because they're always going to be expecting a discount. It needs to be relatively rare. Don't be boring. Don't have these ugly newsletters, like put some love into it, make sure that you're, you know, actually kind of giving them something interesting to look at. Make sure it's the brand voice matches. If you can try to have it be a little bit entertaining, I don't it's gonna be depend on your brand voices, but you kind of want to be a little more entertaining. So they at least read the whole thing, specially your subject line, your snippet, which I'll touch on, um, don't just blast out blog posts with nothing else to say. There's a ton of sellers I've found who thankfully are doing blog posts and they're seeing the SEO value of it. They're like, Oh, I gotta promote this. Let me just shove it into my newsletter and blast it out. And basically, there's like taking the picture and the title or the main banner, picture the title and then just like the first quarter, or like maybe the first paragraph and then doing a read more and then that's it. And that's crap. Don't do that.

Don't go too long without sending an email. So a buddy of Mine while a few drinks, realized that you can really have some really interesting conversations about newsletters and news email lists, so our favorites so far is use it or lose it. Um, so basically if you don't send out an email enough, people are gonna forget that they are subscribed to you and your email list will die. So you actually need to stay consistent and you need to send out emails don't overdo it. You definitely don't want to under do it either. Don't this one really should be under do but I needed one more for DME so don't not adjust them. So basically, always be testing always look at your metrics. Test your day that you're sending test your time test your subject line test your snippet chat test your copy your your creative like every aspect you possibly can you need to test. Cool good now dues do make it personalized. Find a way to personalize it without creeping it out. Don't implement Emotional type newsletter or something where it's like clearly this is going to a lot of people I opt out of using their name I opt out of using their company name or using you know their address or their city or something like that because they're going to know that it's in most places. But by personalize it, I mean maybe you're doing a product line where maybe you do clothes and you want to do 20% off you know, your apparel, and you're sending out sending this out in April, your people in the south should probably get more summer looking creative. Your people in the north should probably get more spring looking almost winter, at least the way it's been up here. So personalize it don't do that weird crap where it's like hey, Carl, nice paint job is on your house the other day like that shit gets weird and freaks people out. Don't go that route for these types of emails, a B test everything. So I kind of mentioned this and do don'ts and I'm gonna mention induced too because you really should just Be a B testing everything. I don't think I've sent an email in 10 years that wasn't being a B test at the time, isn't it? segment your audience. So if you're doing that, that apparel thing I just mentioned, you need to obviously segment out the people who maybe live in the south versus the people who live in the north or cat lovers were dog lovers, or truck drivers versus car drivers. bikers like you need to segment out your audience so that your creative and your copy can be relevant to the audience that you're sending. You could be blasting out an email to everyone but you want to make sure that the people you're specifically targeting for that email blast or at least you're at least giving them their best chance of converting by speaking their language and showing them what they're interested in. Make it visually appealing, which still kind of comes from the dump of Don't be boring, but there was a couple of things that I really wanted to touch on were don't make them ugly. Do some nice banners, do some nice pictures, add some something to it. I love the ones that are gifts and can actually like have some movement to them. Be careful overdoing that Because it can make the email heavy, in which case it won't open. And that's a whole another issue. I'm going to copy some character. So I prefer to try to speak in a brand voice while also tweaking the voice just a little bit where it's got some entertainment value behind it, whether you're telling a story or you are using some kind of pawn or weight or something like that, just so that the newsletter itself is a little bit more entertaining. They may not whatever you're offering for sale, or it's a product announcement or something they may not be interested in. But What you don't want is for them to go I'm not interested in this and I'm also not interested in ever hearing from you again. You want them to go maybe or obviously this isn't the goal, but worst case scenario, want them to go visit cute email. I don't really want this product right now, but it's funny, I'm not gonna unsubscribe. And then always, always, always, always, always provide value. Always you if your value is 20% great sometimes Other things that I will do to adjust that same type of promotional email, where I'm making sure I'm providing value is I will couple it along with a blog post that is relevant to whatever it is we're selling. So for example, we have, we're a couple people who do these, like massive, like, thousand dollar floor type machines. And if I'm just sending out like a tool that kind of plugs into the machine, or whatever it is, it's kind of like those people don't really respond, their audience doesn't respond as well as I'd like to if I'm just like, 20% off tonight, like they don't really care. So what I've changed into is a blog post about how to do a specific thing using that machine. And we happen to have 20% off those tools that plug into that machine. So it's kind of unprovided value and teaching you something new. In this case, it's a B2B. So I'm helping them learn how to make a little bit more money, maybe offer a new service, and obviously I'm trying to get them to convert on 20% off.

But you can do that with anything. There's any e commerce seller you can absolutely tie tie in Your written content with your promotional stuff. And so I want to mention MailChimp is where I was going to feature today love MailChimp very easy to use one of the top, you know, email providers for a long time, I will say not the best for e commerce sellers only because they don't connect with Shopify anymore. And as a Shopify partner, I rarely use them anymore. But otherwise, if you are not on Shopify, or if you are listening to this, you're not an e commerce seller. You should absolutely look in MailChimp super easy to use relatively inexpensive, and they've been around forever plus, they've SMS and all that cool stuff now. So yeah, that was it. Appreciate rate review, subscribe. See y'all tomorrow.