Using a Project Management System to Manage your E-commerce Team 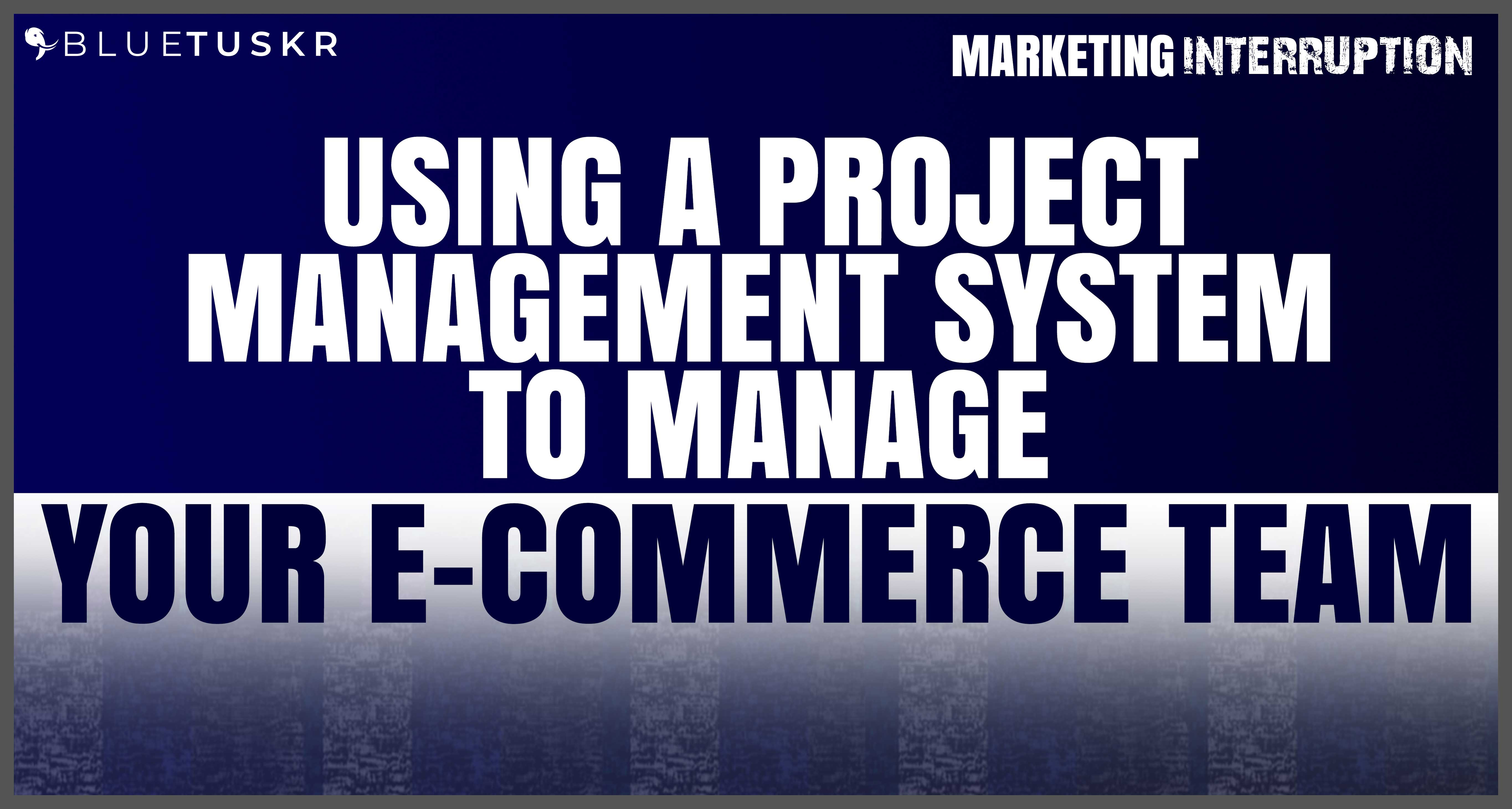 On the 62nd episode of Marketing Interruption, Andrew Maff talks about leveraging project management systems like Asana to not only benefit the SOPs but to also be able to see your business operating itself all within one platform so you can consistently fine-tune while easily getting updates on projects.

Hello, welcome to episode number 62 of marketing interruption. I'm your host, Andrew Maff. Stone. And so I am almost immediately after yesterday's episode got several questions about the project management system. So I figured I would do an entire episode kind of just touching on the project management system we use and how it can obviously be leveraged in e commerce. So I had mentioned yesterday we use a sauna, and then we template a lot of stuff and everyone's like, well, what are you templating? What is it you have set up? How have you set it up? Asana, if you don't know, is he was I can't remember some kind of executive. So the owner, the guy who runs Asana, which, by the way, they're going to IPO soon. And I highly suggest everyone hopped on that because there's not a lot of other project management software's out there that are gonna IPO anytime soon. But there is a the guy who runs it, he was inside Facebook and he created Asana, specifically for Facebook. And then he left Facebook to actually grow Asana himself, how he was able to do that without getting sued for whatever reasons. It's beyond me, but whatever. So we have I think it's like 30 some odd projects where essentially the way that we've set it up the worst part and the best part about Asana is that is so customizable, that it's garbage in garbage out. So if someone doesn't use it correctly, it fucks everything up. So you have to have procedures on how to do stuff. So it means you basically have to idiot proof everything but what we do is I have a project for every type of strategy for the most part so we have we wrong if we bring on a new client I want for Google ads, I want Bing I want for ad roll I have Facebook I have LinkedIn and Twitter and tick tock and then I have email newsletters and we have automated emails we web design and web development Amazon listings and had a plus content Amazon ads Of course blogging content creation, YouTube, admin stuff.

Social management here I'm sitting next I will literally just read every single one of these so all my A plus content Amazon ads, Amazon emails, Amazon listing optimization, Amazon storefront Amazon, auto emails, I'm gonna did Bing blog branding, campaigns, case studies, that's not chatbots eBay ads, which I don't even know why we need one for that because they're stupid. email newsletters, Google ads, HubSpot stuff, product imagery, SEO, social ad, social management, website development, website design, website audits, some of that stuff more agency related. But basically, what we did is we created a project for each of these things. And then there's like, got to be like 50, some odd tasks in everything. And every time I read an e-book, or I read an article, or some platform changes their stuff, or whatever, I go into that template, and I adjust it based on what I know, we need to do now. So when Google updated their algorithm over the summer, where they catered a lot more towards Page Speed, and a lot more towards UX stuff, we were kind of already checking that stuff. We were doing a lot there. But what I added a little bit more on an article that I read about some good ideas, especially the web p images, which you don't know what that is go back a few episodes, I talked about it there. But I went into this template, and I basically added new tasks in there, like check that all the images are this, do minify CSS. Obviously, checkout all tags, and blah, blah, blah, there's a ton of extra crap, there's a you know what, let's just clean that out. And so I adjusted there or when Facebook recently stopped caring about having 20% text in their images, again, didn't really change too much for us, because I don't really like to do that. But we did have a note in there that said, Do not under any circumstances use text more than 20% text in an image. I took that out and said Try not to so basically it's a it's now I'm taking all of my knowledge, my team is taking all their knowledge and stuff that they learn. And every time we learn something, go back to the project and we just adjust the tasks accordingly. So whenever it gets replicated for the next client that comes in, now all of a sudden, it's very simple, and they have the newest best practices that we know fit then that's Where prostrating all that stuff ties into. And if you missed yesterday's episode, go listen to that. So with ecommerce sellers, this is very, very simple, especially for the stupid repetitive stuff to me, most of that comes down to support tickets, lit new listing, so new product launches, that stuff most of the time is very straightforward. So do this for keyword research, then do this for the Amazon listing, do this for the product listing on the website and do this for eBay and this wayfair and then launch this ad in Bali, all that stuff can basically be templated. And then once you launch that next product line, you go Okay, next time, we got to remember to do this. And then after you kind of narrow it down, what we ended up doing is we kind of got it to most of it was really high level. So like first make the image, then make this then make that then we got real deep like then make the image it would then it basically turned into make the image, don't have the image with this, use this, use this and note, so then it got even deeper and deeper and deeper, where now it's just even the most miniscule thing of how to make a banner on a blog, there's got to be like 12 or 15 best practices that we have for that kind of stuff now, where we just go back, and we are always constantly learning. And the worst part about if someone on your team learn something new, they should be sharing it with the rest of the team. But that's just not always the case. Because sometimes they might just go Oh, that's interesting. But that's it, and they don't throw it into slack. Or they don't throw it into an email or whatever it is that you're using. So now what we do is we go if you've learned something, and it's something that you go, I gotta remember to do that. If it's not in Asana, you didn't learn it, because that means no one else in this office is learning it. So every time you learn something new, and you want it to be best practices, go ahead and put it back into Asana and everyone one issue that we've actually had, which I'm now getting on to a bit of a rant here, but as turned into a good issue, because you eventually learned how to get through this hurdle is that you've scaled the process so much and written out the process and put the SOPs in place, to a point where we've even had employees in the past are getting worried that the more information that they put into Asana, on stuff that they do and stuff that they know makes them obsolete. If you are bringing in someone in house, they're not obsolete, they are a high level, well educated, very smart person who fit your culture perfectly. If they can make themselves completely useless and sit in the office.

That means that I can have them spending their entire time researching all new things. What's new, what's something else we should be doing? What's something that we're already doing that we should be doing better? I don't want them actually doing the work. I want it outsourced and that's where sauna and things like process three come into place. I'm going to stop because I'm getting on a rant. So if you have any questions about this, shoot me an email marketing interruption@bluetuskr.com and per usual rate, review, subscribe, tell your friends, tell your family, all that fun stuff, but I will talk to you all tomorrow.