Promoting your BFCM Deals Ahead of Time to Build Awareness 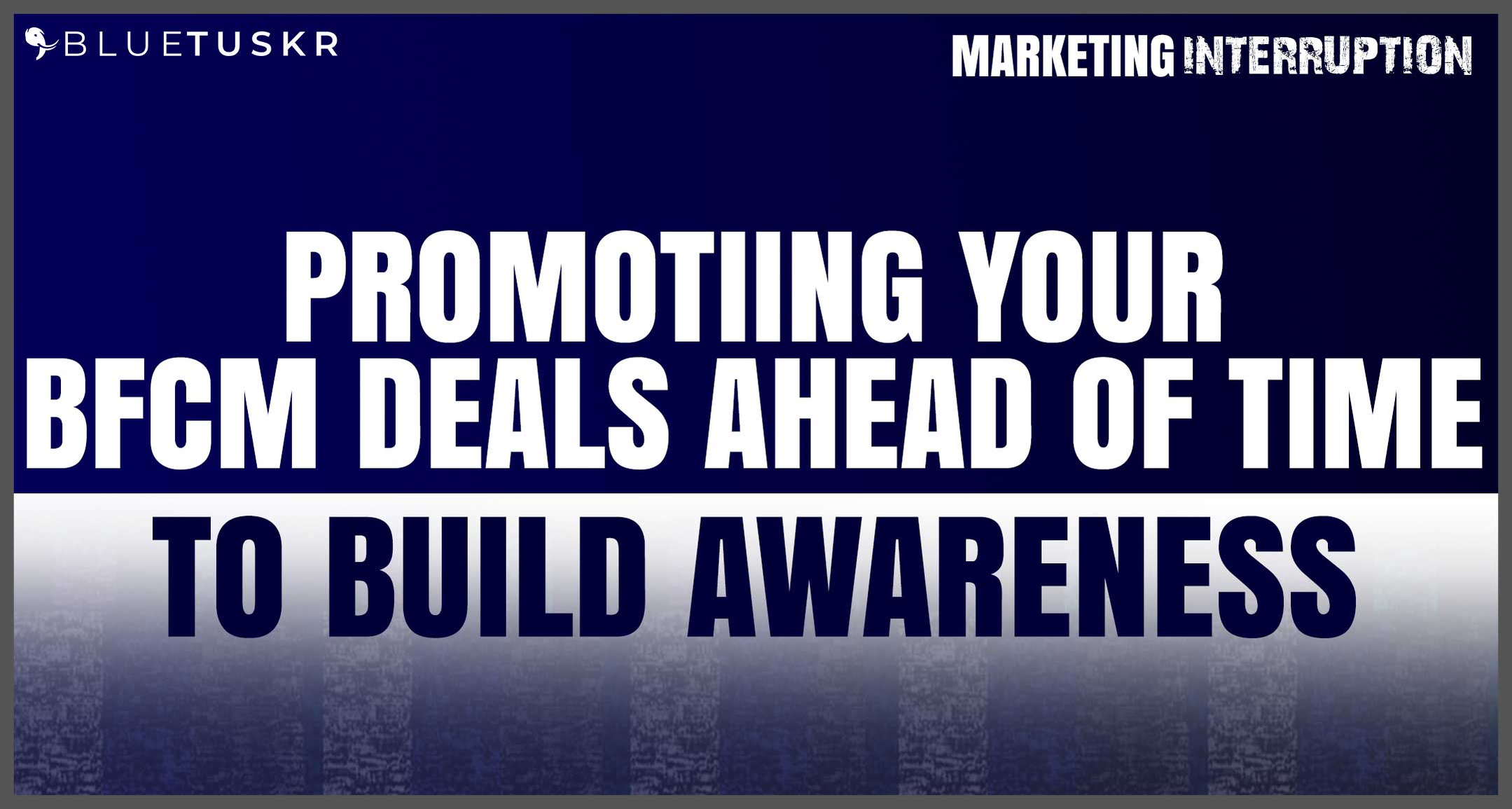 On the 76th episode of Marketing Interruption, Andrew Maff talks about the many things you can do ahead of Black Friday/Cyber Monday to promote the sales you may be having to ensure you're gaining as much traffic to your e-commerce store as possible when it's game time! He dives into typical social media, blog posts, newsletters, etc. but also how you can leverage PR for the big weekend.

Hello, and welcome to episode number 76 of the marketing interruption podcast. I'm your host, Andrew Maffettone. Today, I want to talk to you a little bit about promoting your Black Friday, Cyber Monday deals early. Now this year, as everyone has said, it's very unprecedented. And one of those things that involves e commerce sellers is that a lot of the bigger retailers aren't doing specific Black Friday, Cyber Monday weekend sales like they used to do. Now it's almost all of November. I know best buys all of November, I believe target is all of November, I think Home Depot is October and November, if I'm not mistaken. So you know, for everyone to kind of prepare for that, to be able to run deals for that long. You know, chances are if you're listening to this, although I hope that maybe you are a really high up person at Home Depot or something, chances are, you're not. And that's totally fine. But that also means that you're not running a deal for two months long. So it still kind of comes down to Black Friday, Cyber Monday being a big weekend for everyone. And whether or not Prime Day is going to affect that I don't think it will, I think that we're going to have a very big black Friday, Cyber Monday, just like we always would shipping is going to be a different story. But that's for a different day different podcast.

But what I wanted to talk about was the deals that you're having for that weekend, how do you promote them ahead of time? So it does seem kind of odd to promote a promotion, right? If you're doing a promotion of let's say, you know, 30% off or something like that, how do you promote it early. And so I kind of sat down and did a list of the many different ways that you can. And these are usually the things I suggest. So at a minimum, I typically suggest to start promoting two weeks ahead of time, that seems to be the sweet spot for a lot of deals, or even just a lot of events. In general, when we do webinars or when we do live videos or anything like that is almost always two weeks ahead of time, that seems to be the sweet spot of people remembering things and how often you can hit them. So let's say your two weeks ahead of time. So this is this episode is coming out on November 9, so you're kind of running out of time. So basically, next week, you these needs to start running for you. And so this is this is what I would suggest, right? So social media is pretty obvious. start promoting on your social media that you're going to have a big black Friday sale, think about who your audience is, the sale that you're running, when you're running it, how long you're running it for, and things like that, to kind of help you decipher whether you should tell them what the deal is or not. Some people like that mystery, where they won't actually tell them the sale other people won't, where they'll actually just say, Hey, we're gonna have you know, 30% off for Black Friday or Monday. But social media, it's your own audience, it's the easiest place for you to reach them, I definitely suggest doing that.

Another one that can tie into social media is to leverage some of your influencers. So if some of you have been able to hold on to that influencer contact and have them do a campaign during a certain time, it would be really nice for like the week prior to Black Friday, Cyber Monday or even a couple days before it like earlier that specific week to do your influencer campaigns and actually allow your influencers to tell people, hey, they're having a huge sale on this weekend. Maybe you're doing 20% off, and you give your influencer a 25% off coupon to use or something like that. But some kind of big gangbuster to allow your influencers to actually kind of mention it on top of everywhere else that you're doing it. Another one's pretty obvious newsletters, again, you have social media, that's your own audience. So you should obviously leverage it as much as you can without annoying them. Same thing goes for email list. So sending out newsletters ahead of time to just let them know that there's a deal coming is great. The reason I always suggest doing this is because if you're anything like my wife, you start to plan your Black Friday, Cyber Monday shopping like two or three weeks ahead of time. So if you're going to wait to announce your Black Friday, Cyber Monday deal on Black Friday, it's not really gonna do much shit for you because everyone's already got like a game plan going. So two weeks out, you typically want to send out a newsletter and let people know there's a deal coming. Maybe you tell them what it is maybe you don't. You know that'll be kind of dependent on on how it is you're running that campaign but I always suggest a couple weeks ahead of time to let people know that there is a deal coming. Um, another one is to kind of talk And kind of two different things, you can do some PR, or if you have a local place, obviously, you want to hop in on a bunch of your local publications and stuff like that. But the other thing I would suggest specifically for PR, is that they can actually help you get into those gift lists. So BuzzFeed does 500 of them. I'm sure there's a ton of other websites that do them, I can't think of a single one off top my head right now. But influencers do them big, you know, even like Walmart doesn't have just like top 10 gifts for this type of person, top 10 gifts for that type of person, PR can really help you kind of get into those. So those are obviously going to be PR people that have relationship with specific companies that can benefit you. But I always suggest if you can get on those gift lists to do it, because they have a huge amount of traffic in this time of year. And then they fall off.

Oh, last one, the last one I thought was interesting. So it's partnering with similar companies, right. So the last thing you would think to do is to partner with a competitor. Now what I'm suggesting, but I am suggesting partnering with someone who is potentially targeting the same audience. So let's say you sell pet supplies, so you sell dog bowls, and you partner with a company that sells dog food, they are a pseudo indirect competitor in a certain way. But you're targeting the same audience, and they can definitely both still shop with you. So striking a deal with them. That's actually kind of interesting that I've seen some people do and it can work really well when it's executed correctly. And if it's not, and it's confusing, then it bucket sucks, so I wouldn't suggest doing it. But if you offered 20% off yours, your deal for that the Black Friday, and then said, once you shop with us, we're going to send you a 25% off coupon to the dog food company, then the dog food company says we're going to offer you 20% off, once you do that, we're going to send you a 25% discount to the dog bowl company. So the dog bowl company is offering 20%. But if you shop with them, you get an extra 5% off on your stuff. And if you shop with the dog bowl company, you could potentially get 5% off of their stuff. So it's kind of an interesting way to leverage someone else's audience, you have to obviously have a very close relationship with them. A lot of companies I've seen do this actually can in a certain way, we'll do it like an affiliate way where Okay, they use your coupon. So we are going to give you like you know, the small cut of it or something like that.

But partnering with other companies, some of them even say like, hey, not only do we have our Black Friday, Cyber Monday deal in this newsletter, but we also have so and so So allow, you know, other companies to promote yours. They may not want to do that just because you don't really want to give people too many more options inside of newsletter. But you know, there's, there's something there to be thought about. There's something there to think through about whether you should do something like that with another company for this big ol weekend. That's all I wanted to touch on today. It's this comes out on November 9, I die suck in math. I know that's a Monday. So I would say it's probably three weeks away until that weekend. So obviously good luck to everyone. Go back and listen to several other podcasts we've done about Black Friday, Cyber Monday, but this entire week, I'm going to stick to that weekend just because if you're a seller and you this is a big weekend for you, if you're a seller, and this isn't a big weekend for you, you're wrong. And the only reason you're wrong is because even though you may not have a ridiculous huge gangbuster weekend of just like oh my god, I had 1000 million sales more than I usually do. What you're missing out on is that there's an increase in traffic on the internet for that weekend, a severe increase of people looking to purchase. So whether they're purchasing with you or not is one thing, but if you can get in front of their face, start to build brand awareness or you can do some kind of gated content to get their information for later. Now is a good time to just try something, even if you're not a big gift type of product. It's always going to touch on. So stick around this entire week. I'm going to touch on Black Friday, Cyber Monday stuff all week long. And then of course Good luck for everyone that weekend. Subscribe rate review, comment, shoot me an email at marketing interruption@bluetuskr.com and tell me to go screw myself I really don't care. Just any engagement is always fun. So appreciate it and I will see you all next time.