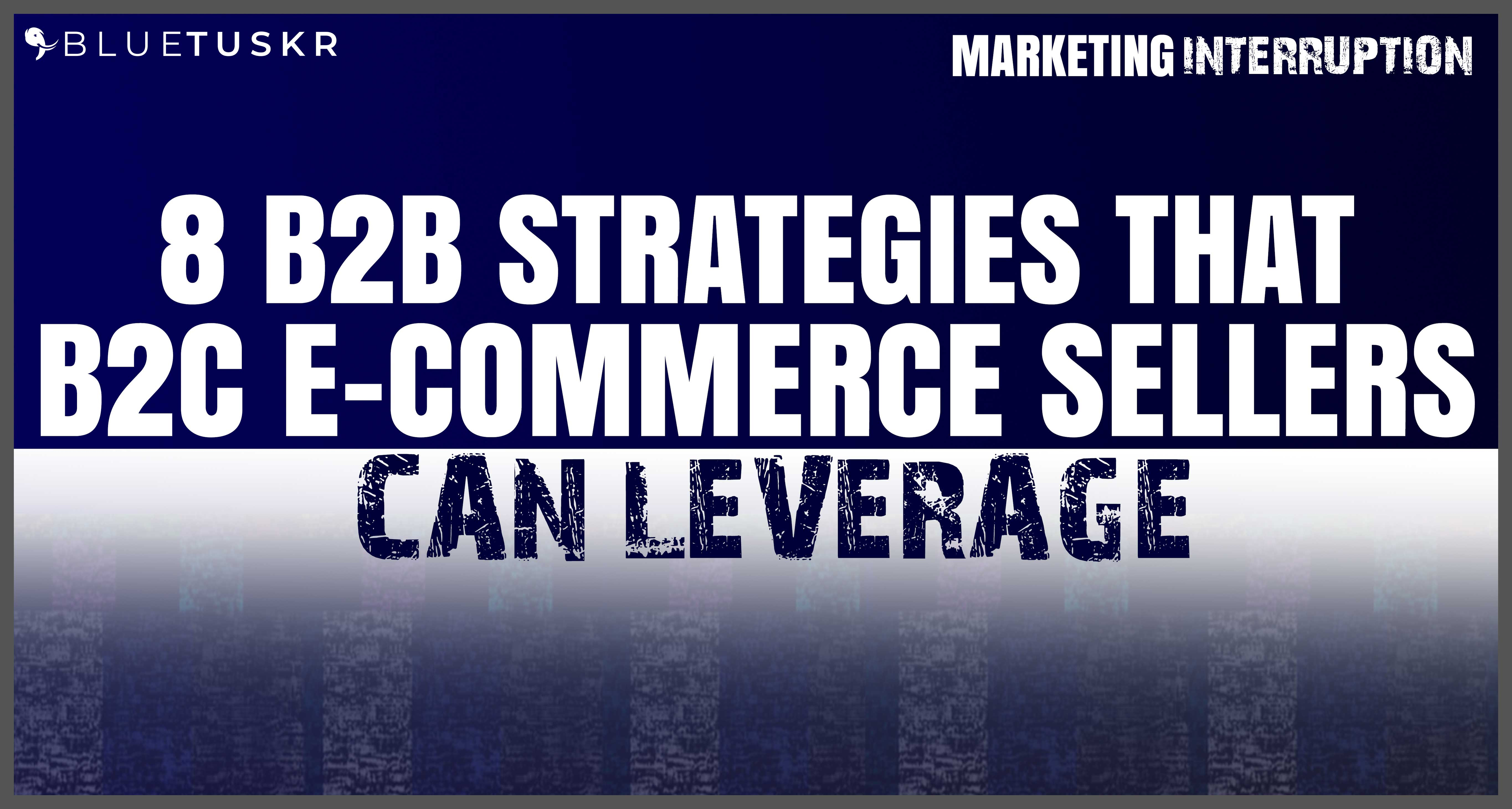 On the 33rd episode of Marketing Interruption, your host Andrew Maff talks about the many different B2B strategies B2C e-commerce sellers can also use. He dives into webinars, live events, podcasts, partnerships, and a lot more. After listening to this you'll leave with a ton of new marketing strategies to try for your e-commerce business.

Episode Number 33 marketing interruption Andrew Maffettone and go so today I'm super stoked for this one. I actually really liked this one. I wrote this one out myself as a blog post and then realize I had to do this as a podcast. So I'm gonna fly through this one kind of like I did yesterday. But so these are my eight B2B strategies that obviously we use ourselves that actually work really well for B2C. And every time I tell an e commerce seller like, Hey, you should try this, they always go, fuck you, that's not gonna work and they're wrong. So here's what we're gonna go through eight of them. So, live webinars gated content, making your influencer kind of a founder thing. LinkedIn partnerships with other companies informative newsletter newsletters in person events and podcasts. So like this podcast, so hammer through examples for all those. So live webinars. So if you are a e-commerce seller, let's say that you are going to use a guy I've worked with before for years, sells collegiate apparel. What we did is we set up a live webinar where we actually got some of the coaches from Alabama to do a q&a. He had a very big audience of Alabama fans, and we just segmented them into one email list reached out to them and said, Hey, we're doing a live q&a webinar with so and so and so and so from Alabama before the season, sit down and ask them any questions that you want. It worked amazingly, obviously at the end, we were able to do a giveaway. We had all their emails, we were able to reach out to them, kind of put them through a different funnel, but worked awesome. That's one example of that. I'm just going to do one example of all these because it gets out of hand.

So gated content, tripwires, things like that, e-books, white papers, calculators, quizzes, all that stuff works great. Every e-commerce seller thinks that Okay, fine, I get it. I'll do a blog, but my pop up is still going to be 10% off when you sign up for a newsletter. Well bite me I'm so tired of doing that. Because most of the time what's going to happen is someone's going to sign up and then they're never gonna, they're gonna unsubscribe, probably. So, gated content e-book super easy, especially if you do like food. So a massive e book of recipes or something like that. Everyone, a lot of sellers don't want to spend the money on it, but honestly, you could spend 1000 to 2000 dollars on an E book and get a ridiculously nice e-book for that size. It's a ton of content that is beautifully designed. And you will get a ton of downloads out of it. And then you're getting emails for less than giving away your percentage. So if you do the math on okay, I gave away 10% over X amount of time, that's going to be much, much more than the 1500 dollars you spent on an E book after several months. So consider it an investment, making your founder and an influencer something like that. So this is something a lot of b2b companies do. I'm literally doing it right now. So basically, taking your founder and making them kind of the face of the company. This works really well for products that people want to buy from a person and maybe not so much from a just a company like a no name face. So you think of a lot of athletes when they sell protein or when they sell gym clothing or things like that. Any kind of athletic apparel, having a Have a influencer as your founder really can kind of help because a lot of people will actually start to follow them and listen to them more than they will the company. LinkedIn works really well, especially for B2C. You have the option of retargeting, I still think that it's pretty much maintains a B2B environment. So if you have a product line that fits that, and that could be apparel. So even people who are timeout clothes that you wear in an interview, or maybe business casual party stuff that you're wearing, or anything like that, but anything that needs to be relevant to the audience, as long as you know, the audience you're sticking to LinkedIn can work very well. Of course, on a B2B e-commerce side, you can go that route too. But for the sake of this podcast, I'm not going to go there. partnerships, these work really well, company partnerships. So blog exchanging doing guest blog posts, Google says that they don't help I think that they're lying. And yes, I realized that I said, I think Google is lying, but I do. And so guest blog posts Like that work great. But what I've also seen really well as partnerships where people will work with other companies that aren't competitors, but have the same audience. And they'll actually do discounts in each other's newsletter. So this, you know, this Friday, we're sending out a discount for so and so's company, not ours. So now they're the consumers are more inclined to stay with your newsletter, because they don't know what they're going to get, they may get a discount for something else that they're really interested in it so it'll actually keep your subscriber rates pretty high. But it will also give you the opportunity to get in front of a new audience if you're the one partnering or you can do things where buy one of these and get one of these from so and so company free depends on the relationship you put together, but they can work phenomenally informative newsletters, not every newsletter has to be promotion, you can if you're putting enough content together, you can absolutely do a monthly newsletter of something that is not offering a discount if you're in instruments. I've seen this done very well as a drummer myself. I see it all the time, where I'll get a monthly newsletter of just New cool YouTube videos that are out or maybe new products in the industry that are coming out for certain companies and e commerce that may not work. But other concerts that are going on or things in your area or something like that, that is not always promotional. But you're always reaching out to your consumers so that they know that they're on your email list, because the last thing you want is to go four or five months without doing your promotion, then you send an email, and now all of a sudden, they've no idea who you are, and they unsubscribe to more We're almost there in person events. So this would be doing like a conference or a meet up. And again, this is very similar to

the collegiate apparel guy I worked with. So basically, you don't need to always focus on your entire customer base. If you can segment your audience enough that you can still get them to show up somewhere. So even if we use him again, as an example, we did actually set up a booth in Alabama game we set up a booth at a Notre Dame game. There's a ton of different ways that you can do that where you're kind of doing meetups. I've also seen companies that will do A trip that will hit five or six cities and actually do giant like happy hours or something like that. It's a little bit kind of like they are showing off product, but it's really more of a just bringing like minded individuals into one place for a good time. And obviously the company is going to benefit from that last but not least, podcasts. So of course, I'm doing one now, but I would still suggest them for B to C. And the reason is, is that there's so much you can talk about about your product and your product line, the collegiate apparel guy, obviously, same thing again, but you also have the benefit of a ton of other product lines. You have hobbyists are always interested in talking about tons of different things. You have anything in sports where you could do a sports talk show you have murder mystery people, so I don't know what you're selling, but it could totally work there too. You have to think about the maybe not your entire customer base, but a certain segmented profitable area that you would want to focus on for your podcast and that would be something You can bring in your new audience and again, that is more than enough for today. So I'm gonna sign off of course, please rate review, subscribe and I will see you all tomorrow.