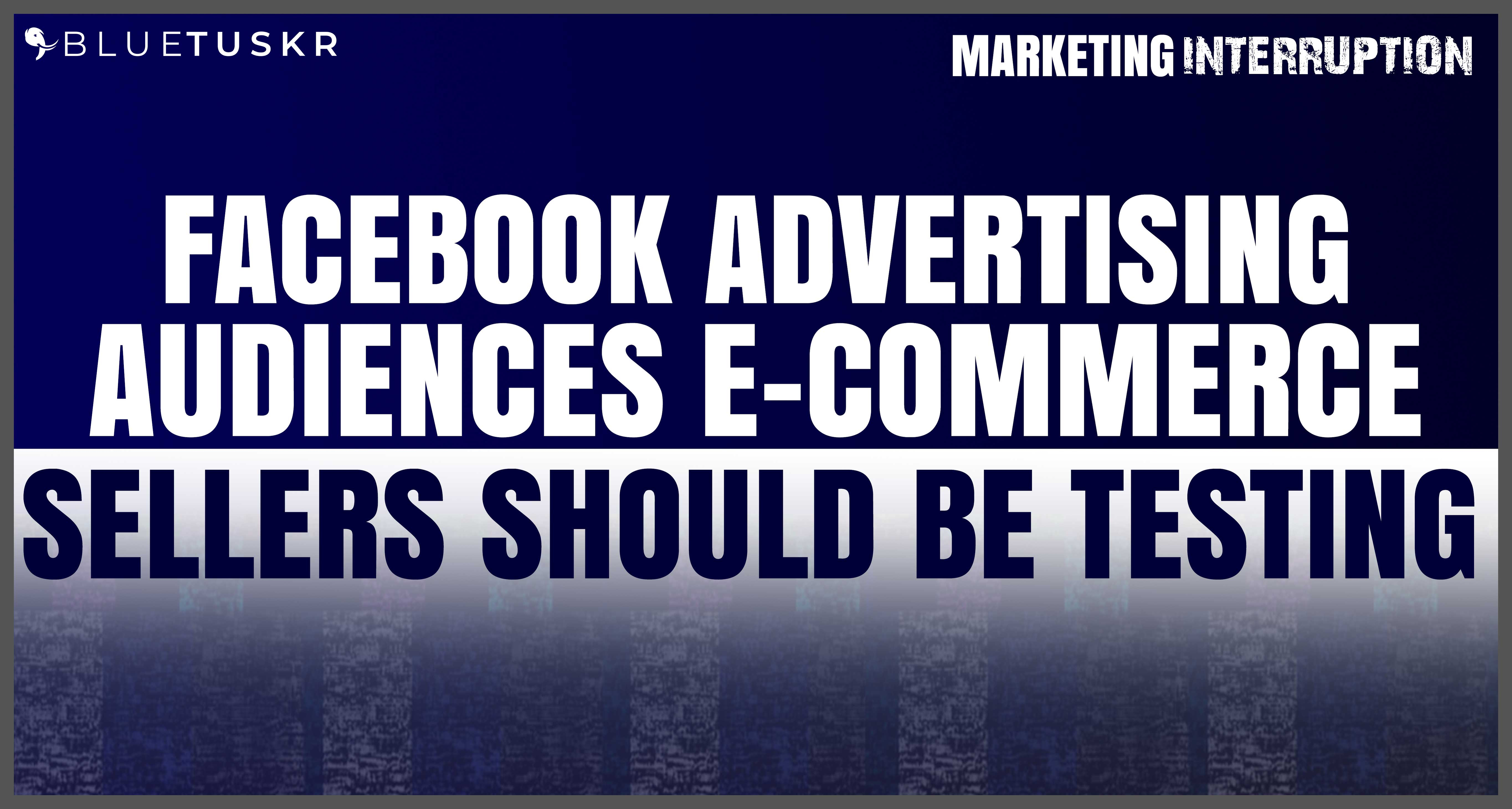 On the 36th episode of Marketing Interruption, your host Andrew Maff lists off the many Facebook Ad audience e-commerce sellers should be testing. Everything from Video Viewer lookalikes to lookalikes of visitors, purchasers, email lists, etc. not to mention the different population percentages to test!

Hello, and welcome to episode number 36 of marketing interruption again, I'm your host Andrew Maffettone. And today I'm going to be hammering through Facebook advertising audiences each commerce sellers should be testing. It's a bit of a long title, so I'd write it down. So I've had this issue more and more recently where we'll test a bunch of different audiences. Typically, some one percenters and e commerce sellers will start to say like, well, now what we're out of audiences, what other platforms should we use? Well, the other platforms you should use are for different podcasts, but you can almost never run out of Facebook ad audiences. So if you don't know what I'm talking about, you're not currently running ads on Facebook. Sorry, this episode may not be for you. Um, so here's a, I don't even know where to start here. So okay. So we had the we're gonna hammer through look alikes. Okay, so we're just gonna, we're gonna ease into this. So I always suggest local likes, I don't like custom audiences. I don't find that doing interest based targeting works as well as I would like it to on Facebook. And if I can give Facebook information for my audience, I think that it's Much more beneficial because you're basically kind of giving Facebook a hint at what you're looking for. So got a few things. So ideally, you're running videos. So if you're running video ads, you have the ability to create an audience that is people who viewed that video or all your videos or certain videos or anything like that up to 25% 50% 75%. And then I think 100% or 90%, somewhere in there, you can create audiences for all those and then you can create look alikes for every single one of those. Most of the time I had the most success with 50% and up depends on how long some of your videos are. But 50% of the time they watch more than half your video as long as your videos not three seconds long, then I find that that audience is actually a good enough audience that they've shown enough interest. So Facebook will obviously take that over look like a website visitors. super common super obvious. When you're creating your retargeting ads you don't want to I suggest breaking them into week timelines. may depend on your product line. But if you have them there'll be seven day 14 day 21 day so on. And I would always suggest trying to look like of each of those really 100 day audience look alike is probably going to 180 day look alike is going to work just fine as well because you're giving on Facebook enough data there to really work with and your seven day audience versus your you know, hundred and 79th day is not gonna be that different. The other thing I do is I break it down by category. So if you have a multiple different categories of a product line, so work with the seller several times who does a lot of different OEM aftermarket Apple accessories so like iPhones and watches and Mac books and things like that, and they're all like cases. So she actually segments her audience by all people who are interested in iPhone stuff. All people who are interested in Apple Watch stuff, and you can create people you can create look alikes of those visitors. So everyone Who has looked at an Apple iPhone case within the past hundred 80 days and make an audience of that. And then the ad that you're going to run there is obviously going to be more relevant to an iPhone because you obviously want to target iPhones there. So breaking it down by category, sometimes even by specific product works really well. And also as long as you're getting enough traffic there. And then you can also do that with blog posts. So if you have blog posts that are relevant certain things, maybe blog posts that are relevant to an iPhone or a watch or computer then you can obviously segment those audiences into those as well. So look like across the board, purchasers or converters, so people who have purchased with you recently or a past hundred 80 days is fantastic because it's literally your ideal customer. And converters could be people who signed up for a newsletter maybe have not converted yet, but all those can obviously be someone that you want to create an audience as well.

Then "Engagers" so people who have engaged with your entity of your Facebook ads or any of your Facebook posts, you can do the same thing with Instagram. So people have engaged with you recently. So then that way, you can actually touch on people who look similar to people that are already interested in your posts. And then we have same thing Facebook and Instagram ads. So yeah, so usually, I'll run through all those, we'll hammer out a bunch of those, we'll test the ones that are working, we'll leave them running, we'll increase the budget. And then after a while, they're kind of like, okay, let's start new audiences. But that's just the 1%. Now you got to do 2%, and then 3%, and then 4%. And if you just counted I probably did, I just should have counted these, but there's probably like 15 of these, which means as soon as you do a 2% now you got 30 as soon as you got 3%. Now you got 45. So there's a lot of lookalike audiences you can create. And you always need to try those two, three and 4%. It's very possible at the 4% won't work as well as the 1%. But you'd be surprised how many times I've actually come across purchasers at one point percent that work really well, and a 4% that don't but a 4% of these website visitors that works really well and a 1%. That doesn't. So sometimes it just kind of depends on the algorithm. It depends on your audience. It never hurts to test it. If you're worried about trying a 4% or even higher, just reduced that budget, give Facebook just enough room to try and test it. But that's exactly what I would do so much all the audiences I want to list today. That was my episode. Okay, good. Hope you liked it. So see you all tomorrow.