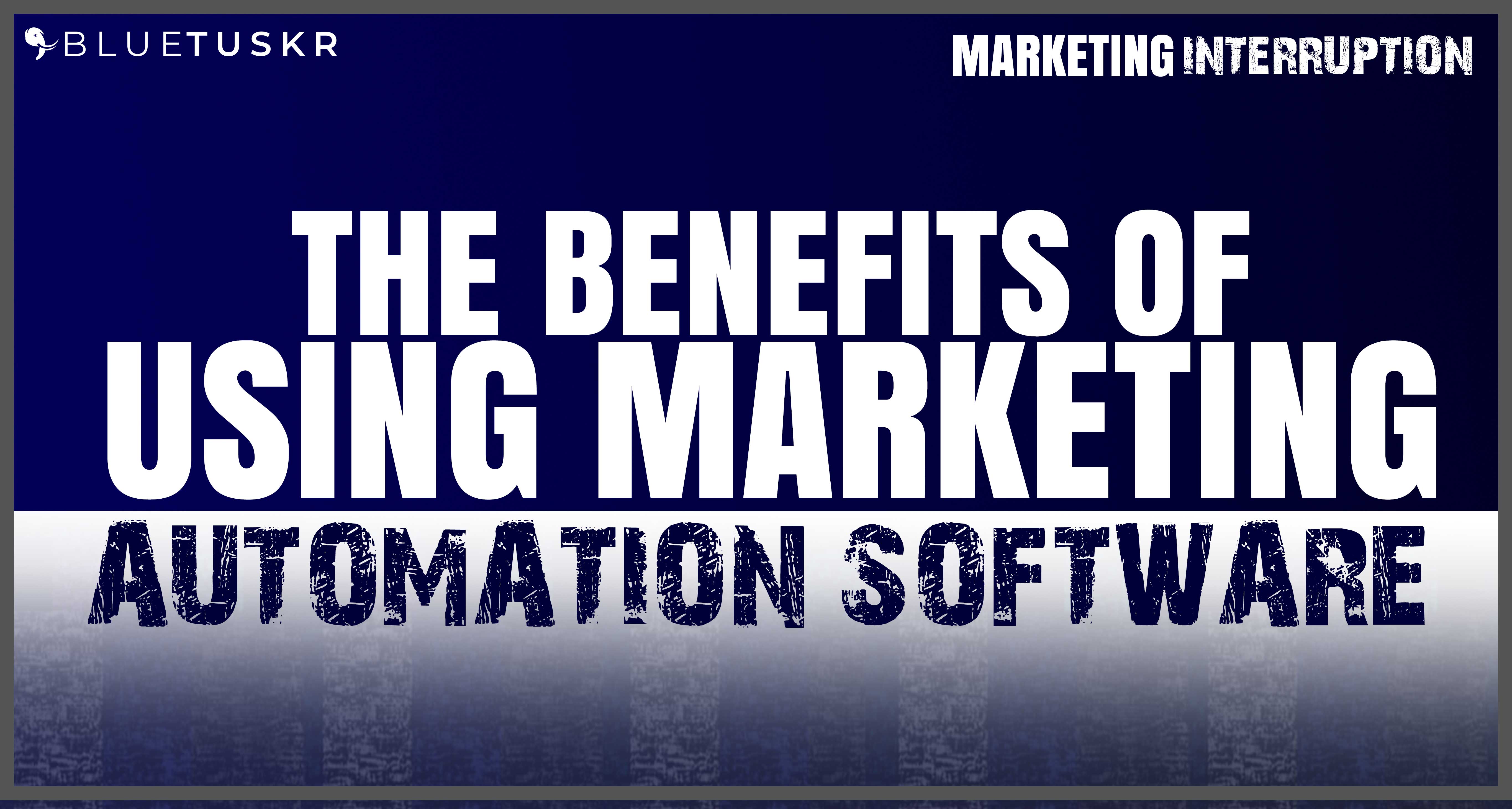 On the 11th episode of Marketing Interruption, your host Andrew Maff talks about the wide wide world of marketing automation. Although it can sound like a big scary concept, marketing automation can help you scale your business much faster than you may ever think. Listen in as he dives deep into automating targeted emails while also creating lists to trigger similar ads and personalizing campaigns.

0:37
Hello, and welcome to episode number 11 of marketing interruption. I'm your host Andrew Maff stone and today I'm going to talk to you about my favorite subject, the benefits of marketing automation. So I'm actually going to lead this episode with my featured tool for today. Simply because it's it's the one I've used for so long. I will be very honest, I have used a lot of other marketing automation software's, and they all are very good if you leverage them a lot. I just have a personal preference. I'm a big HubSpot guy. I love HubSpot mainly because on a lead generation side, I also get to tie in all the CRM stuff, which is great. So market automation, the benefit of it. Keep in mind, HubSpot does not pay me $1. I just use them all the time, I'm going to use them as a reference. But I'm also just going to talk about marketing automation in general. And one of those things is, I know a couple weeks ago, I talked a lot about content creation, and how you just need to be putting out a ton of content and you need to basically be everywhere that you can be and it's difficult, but here's how to create you know, one piece content and cut it up and all that fun stuff. When you're creating a ton of content. And you're also relying on running advertising and doing email marketing, if you're doing a great newsletter and even daily newsletters, and then you also have sales and you have videos that you're creating, you're doing all these 500 different things going on. If you don't figure out how to automate it, it becomes almost unscalable. Because you can't simply just have a massive marketing department with a ton of wildly like new people learning stuff. And basically going over like constantly training and constantly, it's just not scalable, because you're, you're going to spend so much time training and teaching and you're going to spend a lot of time doing stuff that you could automate. Now, AI is definitely something that we'll have to get into at another time. I'm not going to get on there. I'm going to go after more if then statement stuff for now, which Yes, and it was kind of also a stay with me. Um, so I want to talk about a lot of different things you can automate. So I know we talked about consecration couple weeks ago, and you know, getting content, all that fun stuff. So I leverage HubSpot in many, many different ways and one of the things and many other marketing automation software's I don't want to be biased HubSpot, but there's so many different things that you can do to get people as far down the funnel to almost just convert and sell themselves before you even have to talk to them. Your goal is a marketer. If you're working with if you're an e commerce company, your goal as a marketer is just to get more sales at the end of the day. And that's it. And then if you're in a b2b business, and you're and you're doing lead generation, your goal is to get as many highly qualified leads to your sales team as possible, and as little unqualified leads as possible. And basically have that person ready to just say yes, and almost make the salesperson, like just a formality that they have to go through. So a lot of things are kind of everywhere, right? There's so much stuff going on. So the benefit of marketing automation, really is it's a general term and I know I'm sitting here basically preaching, marketing automation great every marketer should know that they Need to automate everything because who doesn't want to be sitting on a beach while they're making money? It's great. But there's a lot of things that you need to think about with marketing automation. And this is where I know I mentioned this a few weeks ago, where you have to think about when you're doing a specific strategy, you're doing a specific

4:18
tactic or whatever, you have to think about the other things that it touches. So yeah, great. You're working on paid advertising right now. But you also have to think about that email marketing campaign you're running and think about the landing pages it's sending to and how they convert and what steps are taken after that, because it's going to decipher the content you write the times you post the it's gonna save everything. And the reason I bring that up because you have to do the same thing with marketing automation, you can let's say you have a very simple automated marketing email that goes directly to someone after they download a piece of gated content. Okay, you downloaded a live calendar and I send you an amine an email immediately with the link to the calendar, it says great and then you have the standard Wait a day, send them another piece of content, wait two days, send them something else and you're kind of sending down an email funnel. It's great. But if they don't unsubscribe after like six or seven emails, they're just gonna get annoyed by the fact that you're sending them all these emails of extra crap. Or they're going to get very intrigued by the email and they're gonna start digging around, but they just aren't converting and you don't know why. So, one of the things that I will set up is, you know, you have to think about other places that they may go and other things that may see. And you can also think about like within HubSpot, I know that you you can you run the ad, you mean you can run the ad direct, you can run a social ad. He's directly through HubSpot. You run the ad through HubSpot, and you can actually see if someone interacted with that ad, then you can see what content they may have have looked at what videos they may have viewed and things like that. And the more information you have about this person, the better. So you can start to put them into buckets. So okay, this first this group of people downloaded this key content, so on This many social ads and read this many emails, this is a highly qualified group, we're going to now trigger an automated, we're going to trigger an automated email marketing campaign that's a little bit more, it's a little bit more straightforward of, hey, call us Let's work together kind of thing. And then they're also going to get put into a different audience that then gets shared over to Facebook, and now they're going to start to see a Facebook ad. That is a lot more, you know, get in touch with one of our sales people kind of thing. If you haven't noticed, by the way, side note, I'm not the coffee guy in the house. So you just set up all these all these different things. You think about all the different touch points. So it's kind of like a if you look at the funnel of where they're going, and you see like, okay, from the top of the funnel, they're going to the to the website, and then from the website, maybe they don't go anywhere else. I set up retargeting them maybe they're going here and I set up this. There's several different things you have to do. You're always constantly thinking the benefit about marketing automation, is you can basically set these things up, automate the email automate the the list that they're added to that they then get triggered to a new Facebook ad automate the chat bot or the text message that may directly go to them. you automate all this stuff, and then you get to do my favorite part, which is sit back and just watch it happen. You get to start reading the data. Okay, this audience is reacting very well to the text message, but they're not loving the emails much. Let me tweak that. Normally, creating that list, sending that email sending that text message is an enormously long process that takes five different people who have 10 different concepts behind what they're doing. But if you can automate all that you can sit back and focus more on much bigger things. Don't spend your day to day making new emails all the time and triggering out emails manually. Don't spend your day to day creating new lists and sending them to Facebook. And creating audiences that way, you want to set all this stuff up, you could easily take a regular, and I've done this countless times, or work with a company that will do usually, let's say,

8:14
under 20 million, we can do in revenue a year, we can basically sit down and go, okay, it's going to take us X amount of hours to set up this marketing automation machine. And then it's going to take us like three hours a week to just make sure that it's running properly. And then additional, you know, 10 hours a week to optimize paid advertising. So we'll go from basically having this massive marketing department that could have 567 employees and a $20 million company go down to just just outsourced like, Hey, we're gonna set it all up and then we're going to we're going to tweak and adjust. So now we're spending our time improving or spending our time improving. Instead of just doing otherwise, you're doing stuff with no true data. Automating is my favorite thing to do. I will preach automation all day. I love finding things to automate, so that no one has to worry about them anymore. As soon as you figure out okay, this needs to be done every day at this time, automate it. That's it. I already gave you a future tool. So that's it. So please make sure that you start sending us your questions so that I have something other than friends and family going forward for our Friday questions or even off price are doing during the week too. But if not, rate review, subscribe, email me with any questions, comments, concerns to marketing automation, nope. Marketing interruption@bluetuskr.com and I will see you all tomorrow.