Why Marketing Specialist Aren't as Necessary as They Used To Be 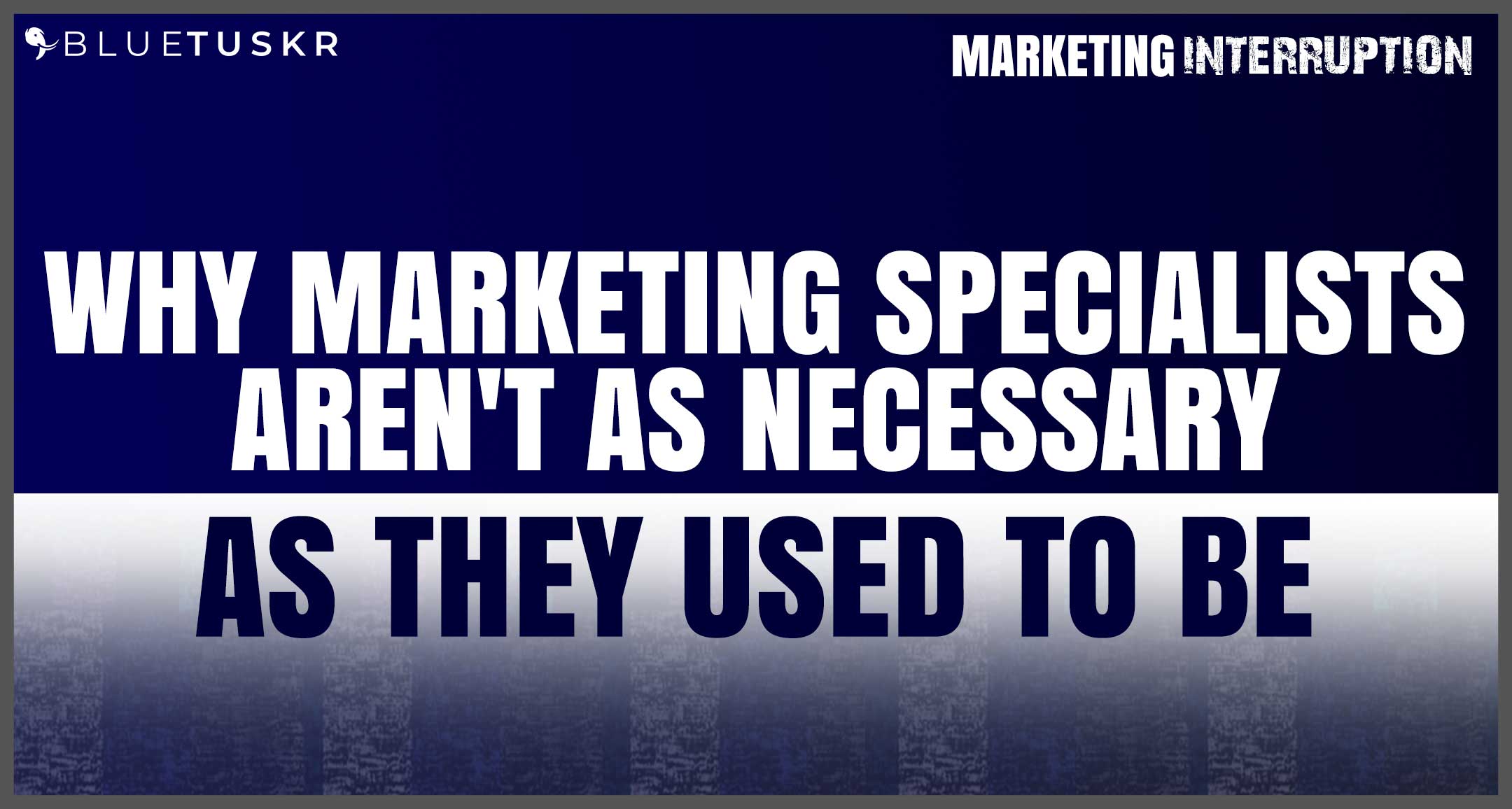 On the 67th episode of Marketing Interruption, Andrew Maff talks about how the marketing industry, specifically in e-commerce, has changed over the years and how specialists, although necessary, are not as important as they once were as marketing strategies slowly start to merge into each other.

Welcome to episode number 67 of the marketing interruption podcast. I'm your host, Andrew Maff. And today I'm going to talk to you about how marketing specialists aren't as necessary as they once were. So I want to give some insight into what it is I mean, here, so I would say as soon as three or four years ago, and then all the way prior to that all of the channels that you would advertise on or that you would be doing any kind of branding on or any type of marketing really, they were all very separate, right, you had didn't really have much of an omni channel approach you had Facebook was Facebook, you had Google was Google didn't really care about anything else around that you had print, you had radio, and it was kind of just how is each individual thing doing at its certain time. That has severely changed, everything has really become more of like this omni channel experience where, you know, Facebook is connected into Instagram. And now you're worried about attribution because of the people who are seeing it on Facebook, but can easily go to Google. And because everything's becoming so much easier, the whole process is becoming a lot more fluid, where people can just do whatever they want. And they can go wherever they go, and they can shop wherever they want to shop. And because of that, it's really causing marketing specialists to become less and less necessary. And I don't want to say have to revert to more of a generalist. But you have to have a very strong knowledge in multiple marketing strategies, no matter what like to give an example, when I see a, let's say, someone's looking hiring, and they're looking specifically for a PPC person, right, they're looking for some kind of paid advertising manager. I hate seeing that kind of stuff when they're asking for, you know, experience of five to 10 years of paid advertising and you've managed x budget, and you've done it for this type of industry and blah, blah. But they don't ask all the other questions like how much experience do you have in you know, conversion optimization on a website?

How much experience do you have with email marketing, or with, let's say, social media or anything along those lines. And the reason I would want to know that kind of stuff is specifically for paid ads. And I'm kind of using that as an example. If you have someone who's a specialist in paid ads, and that's all they know. And they keep driving a ton of traffic to a website, but they don't know anything about conversions. The issue is that they'll drive all this traffic, and they'll just sit back and go, it's not working, I can't figure out why they don't have the ability to go into the website and say, okay, conversion optimization, you know, best practices tell me that we need to tweak this, we need to do this, it needs to be mobile friendly, we need to do this, we need to have some kind of overall content strategy, we need to have some kind of tripwire like something along those lines. So having someone who specializes in one specific thing ends up hindering you, because they don't have the ability to speak to why what they're doing may not be doing well enough. Sometimes when we see agencies that specialize in specifically email marketing, it's great, glad you guys are doing that.

But if you don't have any kind of knowledge behind why you know you're getting conversions, or why you may not be, and maybe the landing page they're sending them to is not good enough, it really ends up hurting not only the agency, but the seller that hires them as well. Because the other problem is, you know, a seller can end up spending thousands of dollars a month on an agency, and even higher sometimes, where they're just sitting there going, why aren't you guys getting it done? Why aren't you getting it done and the agency is sitting there going, we're spinning our wheels, and we can't seem to figure out what the problem is because they don't have the knowledge of what the other marketing strategies are doing. Marketing is a completely omni channel approach. Now you have you know, people are running ads on Facebook and there's it's just brand awareness because they know that they're going to end up going to Google or going to Amazon or Walmart or eBay or jet or any of those other random I think jets around. Um, but it's such a fluid approach in the way that people shop. And the way that people are marketed to now that having someone who's such a specialist in one area becomes such a struggle, because you really just don't have, they don't seem to have the ability to understand the overall strategy, they need to be able to look at an entire marketing plan and understand where they fit in. But unfortunately, that's usually not the case, unless they're in house. And it might be a little bit easier. But that's really why I started to see that marketing specialists, although can be useful, are becoming less and less relevant, if they don't have some kind of other information, or are being directed by someone who has kind of a more overarching experience, who can kind of guide and tell people like, hey, paid ads guy, do this email marketing guy do this. And, you know, website designer do this just because they're able to kind of manipulate and move those puzzle pieces around.

But just kind of an interesting thing. I've started to see a lot with ecommerce sellers who are like, Okay, the first thing we want to hire is, you know, a Amazon ads guy, which is great, but then they have no idea how to do, you know, listing optimization, or they have no idea how to optimize a storefront, or they don't really know where traffic's coming from, but they're getting a ton of branded traffic and they don't realize that it's coming from social like having someone who's so specific in one thing is really starting to hurt sellers. So I'm really starting to advocate for having more of not a generalist, but a specialist with a generalist kind of touched to it. It's kind of all I want to talk about today. It's very interesting topic. I'll bet I have some people who disagree with me. So if you Wherever you're listening, feel free to shoot me an email marketing interruption@bluetuskr.com or comment on YouTube or on our website or wherever you're listening to this. But if not, rate review, subscribe, all that fun stuff. I'll see you all tomorrow.