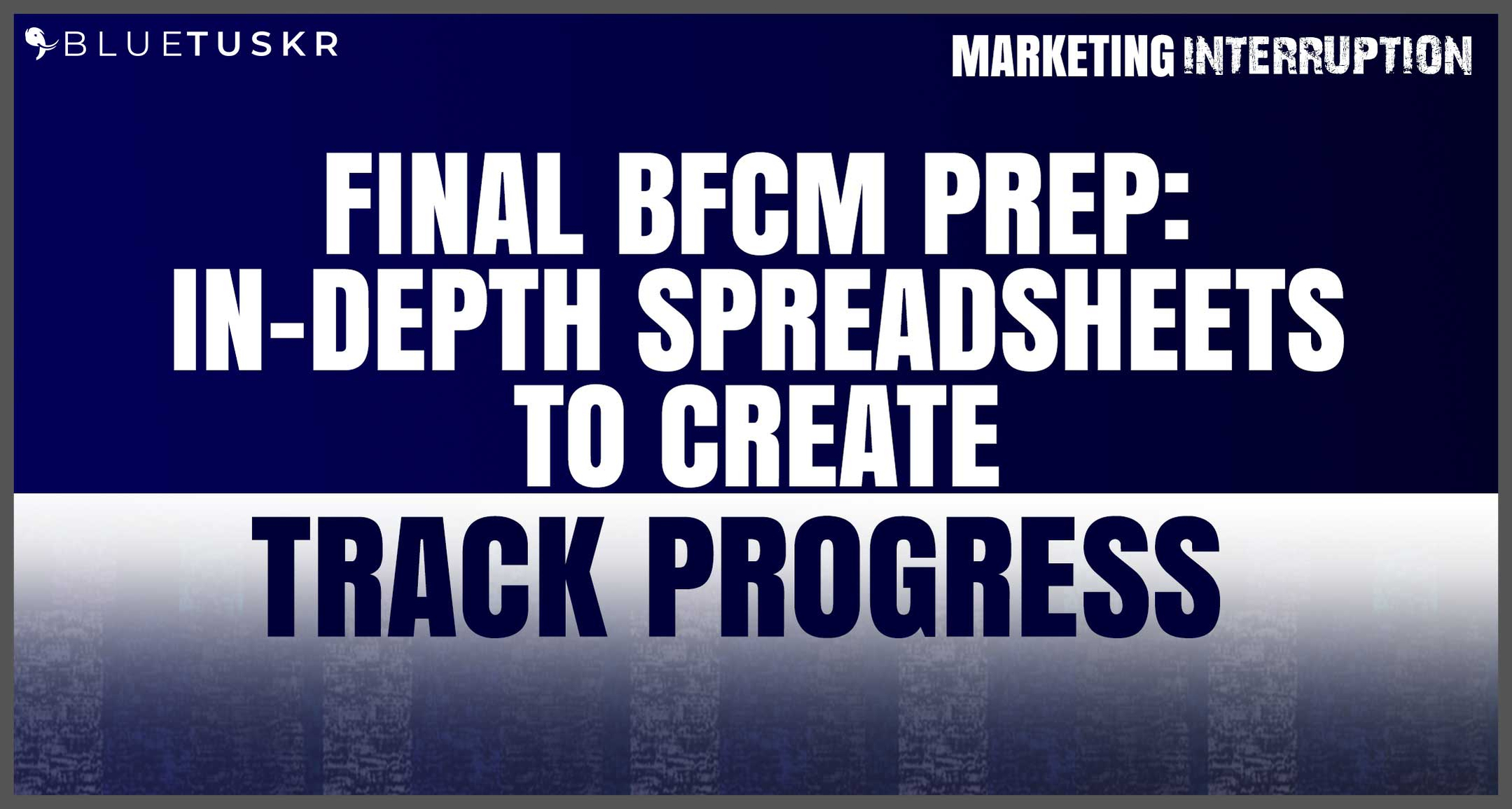 On the 81st episode of Marketing Interruption, Andrew Maff kicks off the Final BFCM Prep Series by diving into how sellers should be tracking their success throughout all of Black Friday/Cyber Monday to make sure they're investing their time into studying results so they can prepare even better for next year.

Hello, and welcome to episode number 81 of marketing interruption podcast, I shocked him still doing this. So this week, I'm going to stick to a final BFCM prep series. So this is the final Black Friday Cyber Monday series. This is essentially what I'm telling you, you should be doing now in your final day. So when this comes out your final days because we're all dying this year. Um, so this comes out November 16. So that means that Black Friday, Cyber Monday is the following week, basically means there's not much more you can do at this point, I hope that you have some stuff already planned. I mean, there's more that you could do, but it's stuff that I hope you had done already. So I hope you have, you know, your newsletters prepped and your ads are all timed and campaigns are sitting in the budget you need them to be in your bids are where you need to be and you've tested everything everything's done like at this point, it should be set up. And you should be really just kind of sitting around making small little tiny tweaks if you need to, or just adding a little bit extra without obviously bombarding.

But so with that, what I want to do this week is I want to talk about what did you basically should be doing starting next week, right? So or even now, you can start some stuff now. So today, one of the things I want to talk about is doing a spreadsheet, right, and which sounds like great fucking Excel conversation, that's going to be fantastic, hey, I don't like Excel, I use Google Sheets so that other people can use the same thing. Um, however, I digress. So I'm talking about here is a very in depth spreadsheet. So we created one of these. And essentially what I did is I created one for paid advertising guys for on a weekly basis. And then I just did for everyone on a monthly basis, where essentially Everyone has their own sheet that they fill out based on whatever KPIs we're keeping track of. And then there's several, like, I would say, Master sheets that don't get filled out because they fill themselves out based on what everyone else put into those sheets. But it's a great way to be able to kind of drill into your business without having to go in and out of 500 different things. If you have someone in your office, that's great at supermetrics or something like that, then that's even better, because maybe you can get it automated. But so what I'm referring to is another one that was basically replicated the same concept for Black Friday, Cyber Monday.

So essentially, we're gonna do it for the entire month of November, just because a lot of our clients we started basically campaigns like several weeks in advance. So it's kind of a we didn't want to miss out on that data. So we said screw it just to the entire month of November. And so what although last year, because it technically cyber Friday landed in December, we did a few days, I do it for whatever timeframe you feel is necessary. But to do your timeframe. And essentially, you want to get every tiny piece of data that you could possibly get on every single day. So November 1, all the way through the end of November. So you can actually track exactly how things did during what time. You also want to annotate within that spreadsheet, what days certain campaigns or certain emails or certain ads or anything went live. So essentially, what you want is a naturally detailed spreadsheet that you can put away. And then next year, when it's time for you to start to prepare for Black Friday or Monday you can pull it out. And what you can read right there is okay. On the Tuesday before Black Friday, we sent out this newsletter the newsletter went out this time this is how many people reached this how many open how many clicks, how many purchased, how many were leads. This is the social ad that went alive that day, the social ad ran from this day to this day. And this is the click rate we got an open rate blah blah and all that stuff you need to get everything then you can also make a master sheet that basically fills itself out that combines like okay. On this day we got this many total impressions across all channels. We got this many clicks across all channels. So you want to have that master part basically answer all of your questions for you.

The reason I suggest doing this and getting as in depth as I'm talking about Because next year, the audio is really weird. I find a lot of sellers will basically start to talk to if they had their way, they would start talking to us in like late September, early October about what are we going to do for Black Friday, Cyber Monday, I started prepping that stuff. The idea of it in July is usually when we do it, I call we have like a Christmas in July week in the office. And then we basically just kind of come up with ideas for Black Friday or Monday, because we're usually people are usually calmer in July. So come up with an idea. And then they go, Well, what do we want to do this year? And I hate that question. Because it doesn't make any sense to me. Why are you just pulling it out of your ass saying like, oh, let's let's just try this this year, I want to look at exactly what we did last year, and what worked. And then I want to redo that, to a certain extent, obviously adjusted for whatever needs to be adjusted based on how those results went. And then what didn't work. Okay, I don't want to do that. That's where I want to test. That's where I want to try something new.

The benefit of doing something, especially in July as well is if we go You know what, let's try this this year, this might work. So and So didn't work last year. Let's try this. And if you do something like that, the benefit of doing this kind of stuff in July and having these conversations is you can go well let's fuckin test it for Halloween or let's test it for what's in July. Not July 4, I usually do it later in July. What's the next one? Oh, you can do like a summer holiday one, just do a random campaign and test something. But it gives you plenty of time to test things before you unleash it in Black Friday, Cyber Monday. I know a lot of people are like, okay, it's a you know, Black Friday or Monday, yes to big weekend. And, you know, yes, there's a lot of stuff going on. But we really need to get like that crazy with it. And to be honest, the biggest thing is that even if you don't have a ridiculous like massive sales weekend, it's a huge time where everyone's on the internet, and you want to find a way to get their attention. And you want to find a way to get their email or get their contact information in any way. Maybe they don't shop with you for Black Friday or Monday, but who gives a shit of your list group because then next year, you're gonna do even better. So there's a lot of different ways that you have to look at and what you're targeting, but kind of going off on a tangent here.

So let's go back to the spreadsheet, create his big old spreadsheet. I think depending on what your company is, I think I've seen where a couple sellers, we do this for actually where we actually do it for November and December because of how big they have in December as well. But you have to be able to look at literally every single detail of every campaign, what campaign was run, what time it ran, how long it ran, what you paid, what your bid was, what your cost per click was click through rate conversion rate, average order value, like it can go all fucking day long. But you need to get all of that. So what I'm also going to do is if anyone want I, I can't give out the the Black Friday spreadsheet because I don't really have a templated one, we kind of had created a half assed one that then we customize to everyone we work with. But I do have a really big paid advertising one and I have a really big monthly one that is basically what is a derived from the Black Friday one. So if anyone wants that spreadsheet, shoot me an email, marketing interruption@bluetuskr.com I have it as a Google Sheet so I can share it with you. And then you can just duplicate it and that's all yours. I promise you this thing's huge. I did the count.

The paid advertising one has across every single channel has 150 KPIs that have to be manually filled out, which sucks. But that's if you have every single channel has ever also on like Twitter and Pinterest and LinkedIn and Facebook and like all of them. In which case get a VA it really only takes like two hours tops to fill it out. But once you fill out the manual stuff, there's over 20 crap, okay, there's like 2200 different metrics that you get out of it. And it's basically like, month over month, week over week comparisons day over day comparisons. However you set it up percentages of spend for certain channels, there's not a KPI in there that you couldn't get. So if you want it to mean email marketing or option bluetuskr.com I'll send you your way. I'm on a tangent. So I'm going to end this episode. So I'm done today. That's it. Rate review. subscribe. I'll see you all tomorrow for more Black Friday Cyber Monday prep stuff.