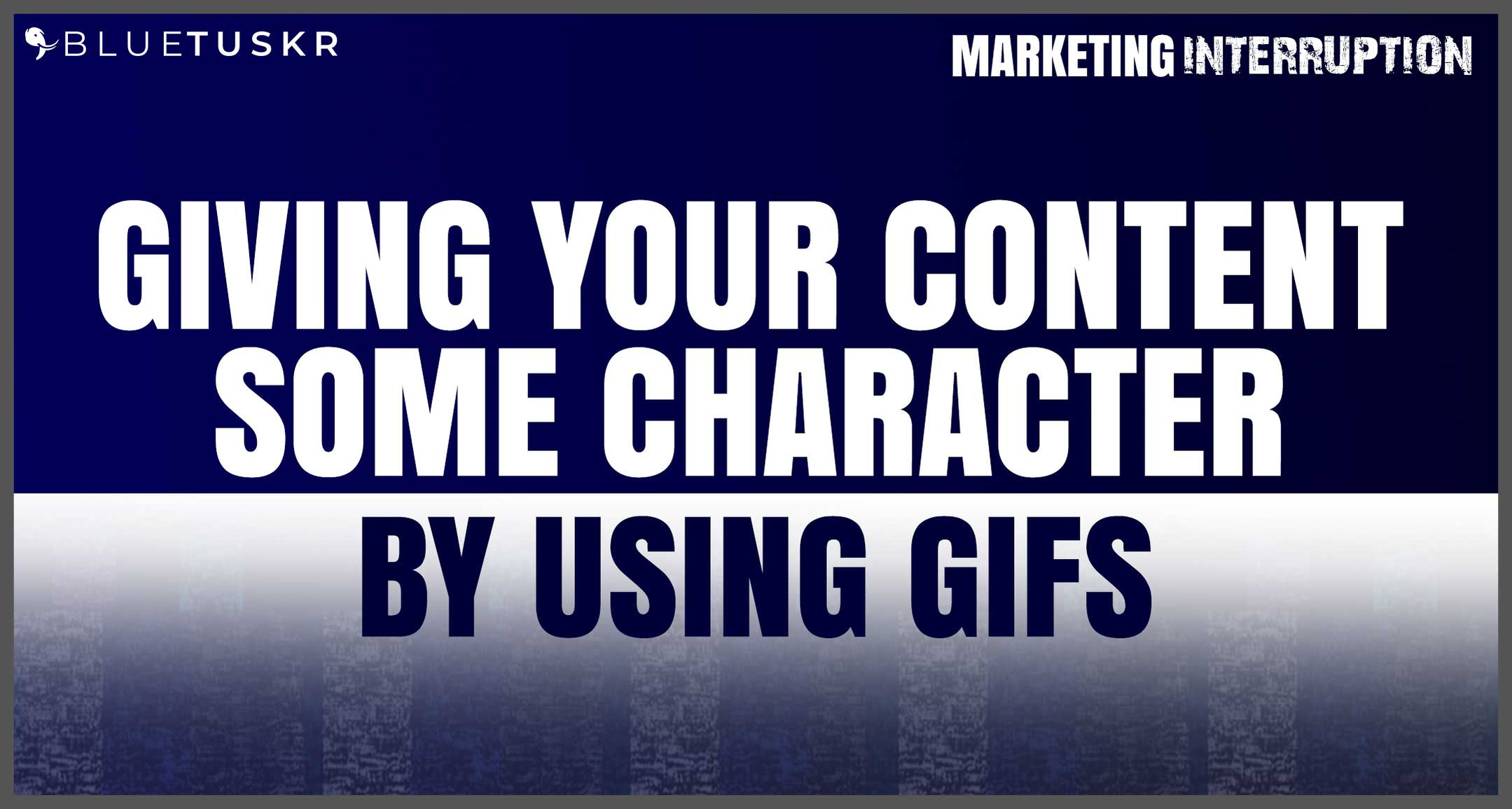 On the 79th episode of Marketing Interruption, Andrew Maff talks about the different ways you can leverage gifs in your content to bring some character to your brand and increase engagement on social media, emails, blog posts, and more.

Hello, and welcome to episode number 79 of the marketing interruption podcast. I'm your host, Andrew Maffettone. Today I'm going to talk to you about giving your business a little flair and some character by using gifts. Yes, I say gifts because that's the correct way. And if you think it's gifts, you're more than welcome to stop listening to this podcast. Um, there's two types of people in this world people who call it gifts and then people who are wrong. So yesterday, I did a podcast on memes. And I was like, Alright, well, there's other kind of goofy viral things that you can attempt to use. And I wanted to stick to this. So and of course, I'm going to do my best here to kind of stick to Black Friday Cyber Monday feel but so let's talk about what it is, right? Usually, it's like a three to five second video that repeats. So it's kind of like a boomerang, if you've ever seen that on Instagram, but it just repeats itself. So, you know, people find funny things that they said, and then they put text in it or subtitles, or they see someone do a funny move, and then that just kind of gets repeated. So it's something that can be leveraged very well, when done in the correct context. They don't work really well on Facebook, or on Instagram for that much they don't, they don't really allow, when you upload videos and stuff, it doesn't kind of repeat, like a GIF would like technically a GIF is never ending, it will just completely repeat itself. Whereas the video obviously has a beginning and an end.

But so you can't really upload them that well on Facebook or on Instagram. However on Instagram, they do work well with stories. And there's even like a GIF search that you can do in stories. But let's talk about creating them, right. So you can actually create your own very easy to do, all you have to do is go to giffy calm. So that's actually giphy.com. And essentially, you need to create an account, if to verify it, I believe you need to upload a handful of gifts just on your own. And then there I think you apply or something to become like a brand or something along those lines. It's been a while since I did it, so forgive me. But you can then just create your own gifts, upload them and people can take them. And they're awesome for kind of giving. I love to use them in newsletters, and I've started to enjoy using them a little bit more in blog post. blog posts, I try not to use too many. If I had like a gift would have this would do really well here, then I would I'll do it, but I'll just do one and the issue is is I find that they can slow the page speed down a little bit more than I'd like it to be. So I try not to use them too much. And if you're doing like screenshots, gifts and stuff like that, usually I think a screenshot goes much further than a gift would. But I'm talking about like, you know, a big movement of some kind is great with gifts. I do. I love them for newsletters, I think they were great with newsletters. And then if you can justify adding emojis to your subject line, your snippet, or even occasionally inside the newsletter and then also using gifts, your you'll actually find that your newsletters kind of have a little bit more, I guess character to it, and you'll find that people are actually going to open them up a little bit more. So great to incorporate.

So obviously we incorporate your product line. That's fantastic, right? Like That one's obvious. And I would even suggest to do it. And in some cases, you might want to just create gifts and throw them up on giffy just to have them because giffy kind of acts like a giant search engine of gifts. So basically what will happen is if someone is searching for something that has a heavy search volume and gifts, and your product shows up, they may end up using that gift and sharing it. So it kind of comes down to a weird SEO side of giffy there where you can actually try to just get your gifts on the first page of whatever searches you're going after. It's a bit of a stretch, but it could definitely work if you can get your own gift to go viral be fantastic. Um, they work great on Twitter. I love using them on Twitter too, mainly because you can really convey like a smartass comment which is what Twitter is basically known for. So if you look at some of the great Twitter accounts out there, like Burger King and Wendy's and Denny's and all the fast food places that apparently have just great social media, their Twitter accounts, they use get XLR and you can kind of see what I mean by using it to just kind of have like a witty smartass type response.

But I would definitely suggest if you can have kind of a mass appeal concept to your consumer base, I would always give gifts try as best as you can, especially in cases, like the ones I just mentioned of social media, and newsletters just because or even blog posts just because most of the time people are expecting that type of channel to be stagnant, right, they're not expecting movement on that channel. So if you can actually have a gift that's constantly moving, where they don't have to press play, and it's just already moving. It works out great. Basically all I wanted to touch on today, uh, one more thing, actually not to think about it. There's one other place that I like to put gifts. And it's when someone if I have a pop up on a website, we have to give me your email to get a discount. Next page. So basically like the thank you page, I love to have some ridiculous gift. They're saying thank you along with the coupon code and all that. I think it works great. gives a little bit extra character. That's another one I just remembered. Yes, that was it. That's all I want to talk about today. If you're using gifts in any other way, besides what I just mentioned, I would love to hear about it, and I'll add it into another episode somewhere or I may just steal your idea.

But shoot me an email at marketing interruption@bluetuskr.com and of course you can shoot me an email there if you have anything you want me to touch on during any of these episodes, but if not, I will see you all tomorrow.