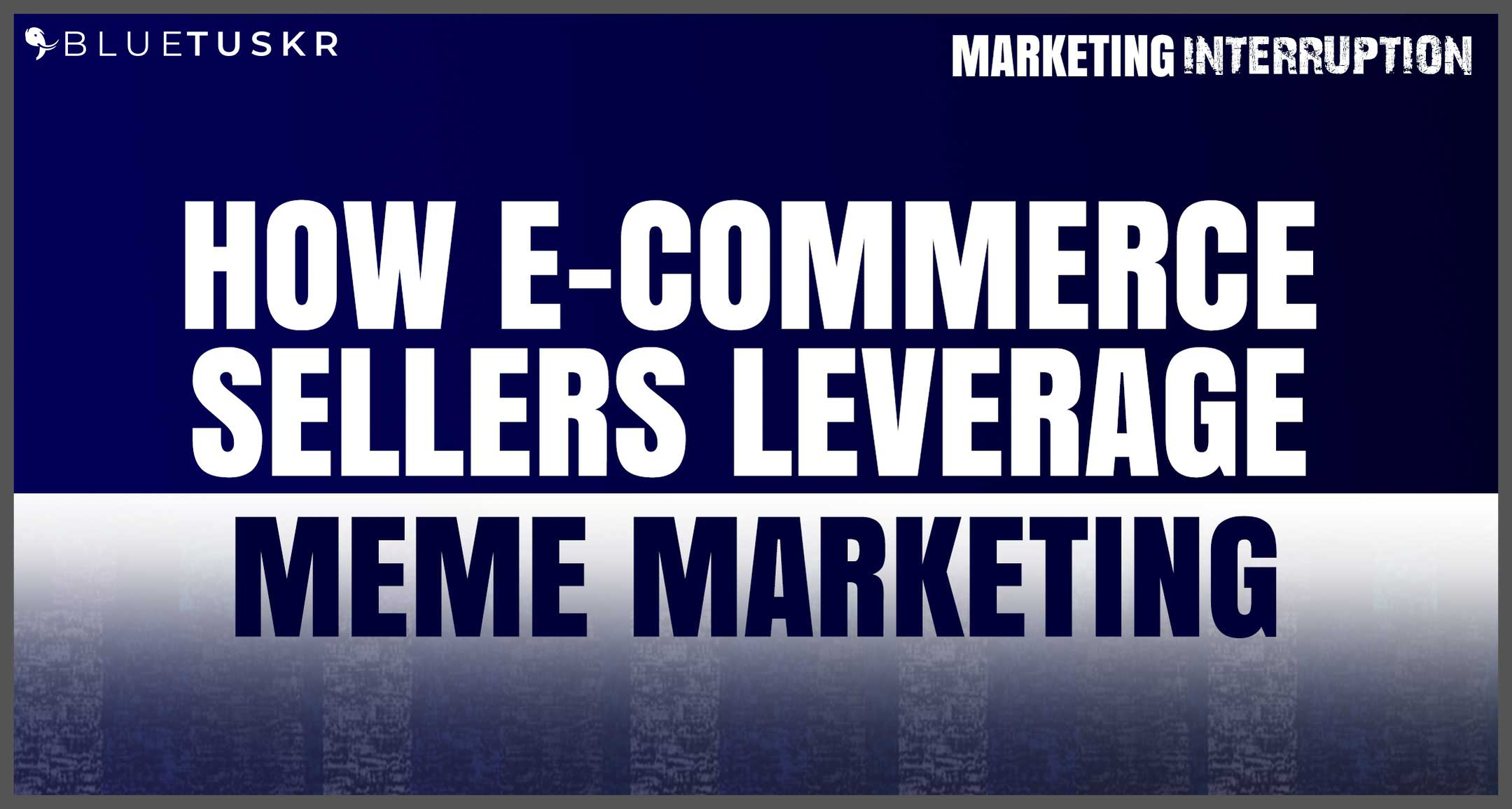 On the 78th episode of Marketing Interruption, Andrew Maff dives into the fun, yet the slightly complicated practice of meme marketing and how e-commerce sellers can leverage interest trends to increase brand awareness and sales.

Cohen, welcome to episode number 78 of the marketing interruption podcast. I'm your host, Andrew Maff tone today, I'm going to talk to you about something that blew my fucking mind. Yes, I said it. I can't believe this is the thing. I love the I love hate relationship with the internet. I love it. Because it's where I make a living. And I hate it because of this society of just people who make up dumb shit on the internet blows my mind. But I'm going to talk to you today about me marketing, which is totally a thing. Not only is it a thing, there are companies who hire people whose sole job it is to do this. It's insane. It's ridiculously, just stupid, but it works. So I get it. I'm not a fan of like the internet lingo. And like, Oh, you know, when people hop on like really dumb trends, like I, it just drives me fucking crazy. But this works. And it's and memes have been around for the decade or so now. So it is what it is. So I'm talking about about me marketing, the first thing I'm gonna mention. So it's it's image flipped calm, and it's IMG flip calm. So this is a website you can use to create memes. There's 500 other out there, I think there's like meme generator.com. Go to Google and search meme generator, you'll be fine.

So what I'm talking about, though, is leveraging these memes to basically connect with your audience. Now, there's companies out there and it's I thought, dammit, I didn't. So me managers are totally a thing. And I thought I wrote down a list of companies I saw that were hiring for this role. But if you go to if you go to LinkedIn, and you search as a job mean manager, it's totally a bucket nuggets Great. So the job of this person is to not only create memes that are relevant to the product line, but to also make sure that they're on top of trends. So they're basically spending their entire day reading and creating memes and figuring out how to leverage them to basically hand off to the social media team or and maybe used in blogs or newsletters or something like that, to actually drive more engagement and more traffic. So why does this work. So this works, mainly because the easiest way to connect with someone is through humor. So you can connect by, you know, really big, life changing experiences, you can connect by, you know, really sad things that that both happened to you and find that kind of commonality between the two of you. But there's one thing that you don't really have to find a commonality between you two, except for the fact that you both laughed.

So for you both smiled, is essentially the thing I'm looking at. So you can basically say if you went to a concert, and you met someone and you knew nothing about them, but you both were losing your minds during this concert or watching, you both realize you have a commonality you're having fun, it's easier to bond with that person. Same thing goes with humor. So for memes, the whole point is being that you can actually drive more traffic, you can actually engage more people. And you can actually develop an even bigger conversation by creating memes because some of these memes are, I guess, more opinionated others are really just for laughs. The other thing that's nice about these two is think about what's an example? Okay, so I hope everyone in their lives has to work in hospitality. But I served for a while and bartending. And one of the things I noticed was that our favorite thing to do to kind of relax from a busy shift or from just a rough day, was to basically talk shop with the other servers and other bartenders while still joking around, right, so we would make fun of other people or we would make fun of customers we had or something like that just to kind of laugh about it together and ease up the day. And so memes are relatively similar. So if you can actually create your own memes that are targeted to your own audience, and you start to post those things, it would blow your mind how quickly they start to blow up just because people are starting to realize, oh, there's a way I can connect to this. I relate to this. So it works really friggin well.

You can create them around your product line. It kind of depends on your product line. If you try too hard, I find that it doesn't work very well. And by doing that, I kind of mean like, you know, if you got a picture of someone smiling, and your copy in the meme just said, Oh, when you purchase, you know, blank new product, it's kind of like shut up like, that's you're trying way too hard. You have to find a way to connect with them, and not necessarily make it a sales pitch. So it's perfect for social media, hence why you typically see these things on social media. And then you obviously need to make sure you're creating memes for your audience. So yes, you can make memes about things that are funny, in general, but it's not specific to your audience. And they followed you for a reason. And that reason was because they had an interest in what it is you sell in that specific community. So let's say, let's say you sell desks, I'm looking at my desk. So let's say you sell desks, and you primarily focus on people who work from home, right? big, huge audience right now, you're not going to really crack jokes, about, you know, political stuff, you're not going to crack jokes about football, you're not going to do things that in theory, could be related. Where Yes, football has a big market. So maybe there's a lot of people who buy desks that also watch football. That's true, but they started following you because you had an interest. They had an interest in working from home and that lifestyle.

So you want to make sure your memes are based around that. So honestly, me integration, super easy and super difficult. At the same time. It's the perfect like social media thing we're posting on social media is very easy. But being great at social media is very hard. So it's two different things you kind of have to look into. What memes are out there that are trending because old meme start to fall off. like a little kid who's got like his fist up, he's actually eating sand. By the way, if you look and you there's an article on it, you can read was eating sand, but I'm moving on. But no one really uses that one anymore. The new ones now Leonardo DiCaprio is everywhere for some reason. So are those little troll looking things from whatever game it is people are playing right now. But you need to look at making sure that you're creating them for your audience so that your audience can relate to it. And then obviously, if you're trying to make sales, if you can incorporate your product, great, but don't force it.

But I would definitely suggest trying it, give it a shot, create a handful of means schedule them out, typically on social media and see what their responses, then you just start to leverage them in different ways. I've seen people do great stuff on blogs, where they'll do a section that's got a little bit of a character kind of like comical character to it. So they'll add in a meme just to kind of break up the monotony of all the copy. It's a great way to do it, it's a great way to try I would not suggest hiring the meme manager just yet. But if you actually start this and it works really well, you may want to have one. So for someone who's creating this stuff full time. I totally wanted to touch on today. Black Friday, Cyber Monday stuff I didn't really touch on it today. But to be honest, this whole meme thing can still be leveraged for Black Friday, Cyber Monday. I think I'm going to do more of like a set series for BFCM next week, but I would definitely say you can create you know, Black Friday Cyber Monday type memes off of whatever it is your sale is so kind of think that through. It's really hard for me to give a specific example to it.

So shoot me an email marketing interruption@bluetuskr.com and I am more than happy to spend time explaining and giving you ideas for memes because I think they're hilarious and they're still fun to do even though they're ridiculous. It's a love hate relationship with them. But that's all I had today. Please rate review, subscribe, subscribe to wherever podcast you're listening to this for and I will talk to you all tomorrow. Good luck.