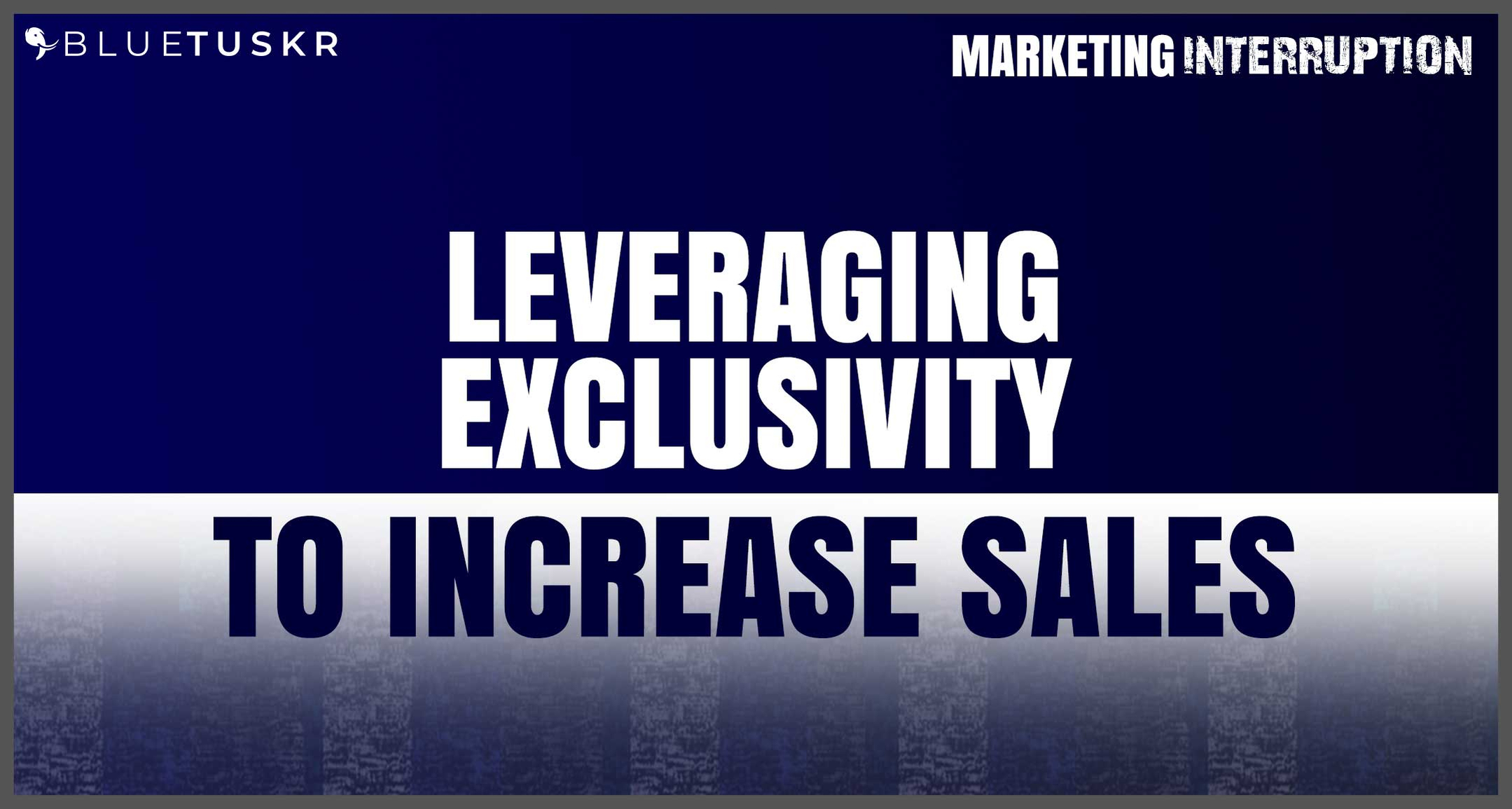 On the 77th episode of Marketing Interruption, Andrew Maff goes into detail about the different ways you can give the elusion of exclusivity to increase interest and sales. Whether you create secret groups, offers to certain customers only, or even require applications to purchase a product. There are a ton of ways to build some mystery around your product line to increase word of mouth marketing.

Hello, and welcome to episode number 77 of the marketing interruption podcast. I'm your host, Andrew Maff. Dawn today, I want to talk to you a little bit about how you can leverage exclusivity to increase the awareness of a deal that you may be running specifically during Black Friday, Cyber Monday. And the reason is, because this week is our ack friday Cyber Monday series. By the time I'm done doing it, I'm gonna be so tired of saying Black Friday Cyber Monday because it's so many fucking syllables. BFCM, I'm gonna, I might change it to BFCM. So stick with me. But I made a list here of different ways that you can do this. And so what I'm talking about here specifically, is kind of making your customer or your audience in any way feel like they are a part of an exclusive group that got this deal. So I'm talking about let's say if you go to a concert, someone spends a little bit of extra money to get a VIP ticket, even though they spent the extra money, they actually in the end feel like they actually got more out of it and will brag to other people that they got a lot out of it. I'm not necessarily talking about asking people to pay more to get more, because that's really just an upsell. But I'm actually talking a little bit about just trying to find a way to make them feel like they're a VIP. So there's a few different ways you can do this. So it kind of depends on things that you may have had set up already. So one of the first things would be like exclusive groups, right. So if you have a Facebook group or a LinkedIn group, or something along those lines that you've created, maybe a slack community channel or something like that, which would be a little bit more b2b. But so let's say you created something along those lines, right?

If you offer that specific group, their own discount that's a little bit higher than whatever you're publicizing, they're gonna feel like they got a better deal for being a part of that exclusive group. The biggest benefit of that as well is obviously minus the fact that you might have a higher engagement rate just because that audience is already much more of an advocate than anyone else. But they're gonna be so excited that they got that little extra deal that others weren't able to get that word of mouth about that group will grow, in which case more people will join that group. And hopefully, you can repeat this same kind of thing next year later on for a different campaign. Now, not everyone has a Facebook group or LinkedIn group or something like that already up and running. If you don't, I suggest doing that too. There's another podcast about that, go listen to that one. Um, the other thing you can do so another one was newsletters, so there's two ways to do this one. So you can offer people who are on your email list a certain discount. So I've done this before, where essentially, the website banner has a 10% off, then maybe I publicize on social media that we're doing 10% off or something like that big 10% off deal. And then I send out a newsletter that says something along the lines of, we have an offer only for our newsletter subscribers or something like that. And now you're offering them 20% off. So they're going to not only be more inclined to open that email, because you're offering them more than what everyone else is getting. They're also going to be inclined to not unsubscribe from that email because of this different thing that you do every now and then. So by offering your newsletter subscribers and basically segmenting your audience in two different ways, specifically one for newsletter subscribers, you can now offer them something completely different. There's an even deeper way you can get into that. We used to do something like this at a company I worked for years ago, and it worked pretty well. It was it wasn't the most ethical thing in the world. But it worked. It was technically I guess, in theory, you could say it was false advertising. I wasn't a huge advocate of it, but it worked. So I guess who cares?

A lot of ecommerce sellers do offer a warranty. Technically, there are some legalities to what you have to do with a warranty and how you can offer it and how someone can obtain one. But what we used to do is just say, enter your order number and then enter your email address. And we will put a warranty on every product that you purchased with that order. But what would happen is the only way they would have gotten that information would be something that we put in the box that we sent out for the product and when case, they would go to this special exclusive group warranty slash landing page thing, sign in, we would really just put their news their email into a regular list and then just kind of ignore their order, because we basically just gave a warranty to everyone. And now we had a very special list of people who we knew purchase with us before, we could, in theory, go and look and see what it is that they had purchased with us prior. But it's also someone who took the time to actually open up the box, find this pamphlet in there want to warranty their product, so they cared enough about the product line. So that was a bit more of like our exclusive group. And what we used to do is to tell people that if you know, if you get your product warranty, you're also signing up for this group where you're going to get special discounts and things like that.

So that's basically a separate segmented audience in your newsletter that you could offer a different discount, you could offer your ad, you could segment your audience in your newsletter, haven't you, I really don't care, you could give girls versus boys a completely different discount, you could do north or south. And you can do it any different way you want. I really don't care. But it's an interesting way to do it. And I've seen it work very well. Another one, another one's interesting, I've seen this work really well. I don't like doing it. But it it's kind of like a kind of like a purchase order kind of like a backorder kind of thing, where you do you apply to purchase. So this will be very dependent on your product line. And it's only going to really work for slightly more expensive products, I would say in the hundred to 200 plus range, where you can actually say, we only have, you know, 1000 of these. So you're doing the standard exclusivity kind of thing where you only have so much, but then say we're not giving it to the first thousand, we're giving it to the first thousand that qualify. And then you're saying we only want to give it to 1000 people that are a certain way or a certain something or who can really convince us that they need it this holiday or something like that. So now you're asking people to apply to purchase for your product line makes it extremely exclusive, it makes them extremely excited to spend the money in itself just because they're like, Oh, great, I got accepted because my story was awesome or whatever. And but that can work, I've seen it work really well. It's very specific product lines, and that type of thing works for but it can work. And then last on my list was early access to products or market research. So this one's basically, we're going to allow X amount of people to purchase this product under the pretense that they fill out a survey and you're doing it for market research. And then you just say that it's highly discounted.

So you sell a product. Normally, for $40. Instead of doing a 30% off discount, you just discount it discount the top price by 30%. sell it to them for that price. And then say all we ask since this is a new product line is for you to fill out the survey. So it's interesting that they can kind of start to feel like it's an exclusive group that's being allowed to purchase this product early at a at a very inexpensive rate. But you're also getting free market research out of it. So that one's interesting and great for new product lines. I don't know if I would suggest that one for Black Friday, Cyber Monday because I usually don't suggest at this time because it's already a little late into the season to announce a new product. But if you are I hope you're doing a big ass campaign behind it. But it is something interesting to think about going forward that you can do for any campaign. That was all I had on my list today. Per usual rate review, subscribe, all that fun stuff. This is our Black Friday Cyber Monday series. So stick around for the rest of the week because I will be making sure that we touch on BFCM stuff all week long. But rate review subscribe shoot me an email if you have any questions on something you want me to cover. That'd be marketing interruption@bluetuskr.com or just comment wherever the hell you're watching this. I'm sure there's a common thing on like YouTube or our blog or whatever. But that was it. So good luck, Black Friday, Cyber Monday. I'll see you all next time.